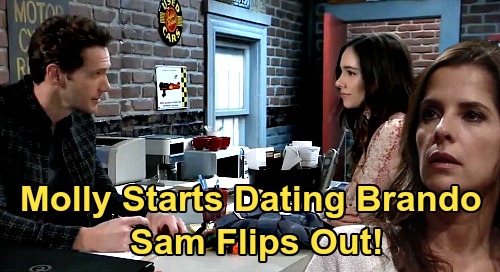 Molly didn’t think her day could get much worse until she wound up at Brando Corbin’s (Johnny Wactor) auto garage. It wasn’t long until sparks were flying all over the place, so GH may have a new pairing in mind. Naturally, the idea of Molly and Brando becoming an item won’t go over well with everyone – namely Sam.

General Hospital has really been strengthening Sam and Molly’s bond lately. They’ve had several scenes where they opened up to each other and connected. That was undoubtedly in preparation for this portion of the story. GH was reminding us of that bond so it’d make sense when Sam becomes a big sister bear!

Jason Morgan (Steve Burton) still seems wary of Brando – and we all know Jason’s always right. Brando has assured Carly Corinthos (Laura Wright) that he’s disclosed everything the Corinthos clan needs to know, but we highly doubt that.

After all, Brando can’t be that much of a clean slate! Every new character has to come with a little baggage – a few dark secrets that can later unravel.

During the week of April 13-17, General Hospital spoilers say Sam gives Brando a stern warning. She’ll put this mysterious character on notice and hope it sinks in. If Sam witnesses a warm and sparkly moment, alarm bells may go off.

Sam may corner Brando to let him know she’s quite protective of Molly. Brando may be warned that if he’s looking for more than friendship, he should look elsewhere.

Some GH viewers are already a tad iffy on this potential pairing. Molly and Brando’s age gap isn’t THAT big, but Molly looks younger than she is and Brando could possibly pass for older. Of course, the age gap may be appealing to Molly.

Jordan told Molly to stop acting like a child right before she met this intriguing, slightly older man. If Sam starts trying to shoo Brando away, that’ll just rile Molly up about being treated like a kid.

Molly may begin to feel like she’s outgrown TJ and fall hard for Brando instead. This forced time apart may have been the worst thing that could’ve happened to TJ and Molly’s relationship.

As Molly’s interest in Brando revs up, Sam’s fears should rev up, too. Since Sam and Jason’s attempt to stay apart won’t be successful, this could be a project they tackle together. Perhaps some Brando digging is coming up. Sam may launch an investigation and set out to prove Brando is bad news.

Brando honestly seems like a pretty good guy, but he may have some skeletons in his closet! Will Sam kick off a Brando takedown mission? Since Jason’s been suspicious of Brando, will help unearth some secrets?