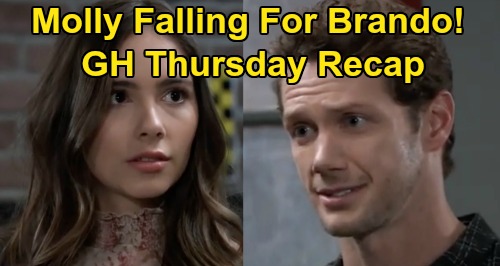 General Hospital (GH) spoilers recap for Thursday, April 2, reveal that Mike Corbin (Max Gail) was terribly confused as he and Sonny Corinthos (Maurice Benard) encountered Brando Corbin (Johnny Wactor) and Carly Corinthos (Laura Wright) in the hallway at GH. Mike got agitated and told Sonny to “get those people out of here.”

Brando then said hello to Mike and thanked him for taking him to the track as a child. Mike seemed confused and tired, and Sonny took Mike back to his room. Now paranoid, Mike insisted that Brando and Carly were pretending to be family, and he asked Sonny to keep an eye on them.

Meanwhile, Carly and Brando spoke privately, and Carly recounted Sonny’s struggles with Mike’s condition. Brando noted that it felt good to be in Port Charles and connecting with family, then he left for the garage. Sonny returned and relayed that Mike was agitated about Brando. Sonny then went back to Mike’s room, where Mike readily recognized him.

Mike begged Sonny to get him out of the hospital and take him home. Mike held Sonny’s hands and told Sonny that everything would be all right once they got back to Bensonhurst. Mike rolled over to sleep, and Sonny cried. Later, back out in the hallway, Sonny told Carly that this was hell and that he couldn’t do it. Carly held and comforted Sonny.

Meanwhile, in some industrial area, Jason Morgan (Steve Burton) met with Sam McCall (Kelly Monaco). Sam explained about the fiasco with her parole officer, and Jason said it was time to stop looking for a way out.

Jason said that it was too dangerous for Sam to go back to Pentonville given the new Cyrus Renault (Jeff Kober) threat. Jason then told Sam that Cyrus had TJ Ashford (Tajh Bellow).

At the gallery, Trina Robinson (Sydney Mikayla) rushed in to see Ava Jerome (Maura West). Trina was upset about her father fabricating evidence, and she told Ava the whole story about how the news would soon hit the press. Ava comforted Trina, saying that nothing could tarnish the love between Trina and Marcus Taggert (Real Andrews).

Curtis tried to talk with Molly, telling her that TJ was a grown man and that they didn’t know where he was. Molly wouldn’t back down, and Jordan tried to intervene, but Molly insisted that she’d start searching for TJ herself.

Jordan then started yelling at Molly, telling her to stop acting like a spoiled brat and to get over it. Jordan yelled that Molly broke TJ’s heart and now he doesn’t want to be with her. Molly was stunned to hear Jordan’s words, and she left, saying she didn’t expect to break up with TJ through his mother.

Jordan then lamented to Curtis that she had to say those things to get Molly to leave TJ’s disappearance alone. Curtis said that she had no choice, and that they couldn’t risk Molly going off to search for TJ herself. Jordan felt terrible, saying that she broke Molly’s heart, was trashing three men’s reputations, and was going to unleash Cyrus on Port Charles.

Over at Brando’s garage, Molly came in, having just driven her car over a curb. Brando went out to check on the damage, then returned saying it wasn’t so bad. Molly and Brando got along well, and Molly asked if Brando could to the repair.

Molly and Brando talked for a bit, with Molly clearly impressed, and Brando teased Molly about being in law school and potentially suing him if the repair wasn’t right. Brando finally asked for Molly’s name, and she happily told him.

At Pentonville, Kevin Collins (Jon Lindstrom) visited with Cyrus. Kevin and Cyrus bantered back and forth about whether Cyrus was crazy or dangerous. Cyrus proceeded to make veiled threats, which Kevin called him out on.

Kevin claimed to be doing a study of men in solitary confinement, but Cyrus didn’t buy it, and Cyrus soon realized that Kevin was Laura Collins’ (Genie Francis) husband. Kevin promised to send along Cyrus’ regards to Laura.

At the PCPD, Laura talked with Robert Scorpio (Tristan Rogers) about what was going to happen with Cyrus. Robert’s opinion was that Cyrus would soon walk, and Laura said that wasn’t going to happen.

Robert wanted to know Laura’s plan, and she said she’d tell him when the time was right, and that she wanted Cyrus locked up while Mac Scorpio (John J. York) kept investigating the recent shootings.

A bit later, Kevin arrived and spoke with Laura in the interrogation room. Laura asked how the visit with Cyrus went, and Kevin said that Cyrus was a narcissist who made several veiled threats, although he was unquestionably sane.

Laura and Kevin discussed their plan to send Cyrus to a psychiatric facility. Robert walked in and overheard, saying that it wouldn’t work.

Laura said that she wanted to transfer Cyrus to Ferncliff, but Robert said that Cyrus’ lawyers would see it as the ploy that it is. Kevin chimed in that he’d argue it was in Cyrus’ best interest to go to Ferncliff.

Robert said that no matter what, Cyrus would get out and that Laura was in his crosshairs. Laura asked if there were any other options to delay Cyrus’ release.

That was a great episode of General Hospital, and we’ll be sure to give you more updates as GH news comes in. Stick with the ABC soap and keep up with CDL for the latest General Hospital recaps and spoilers.