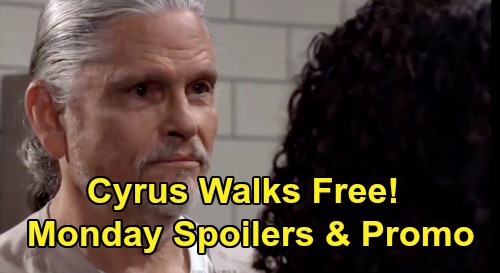 General Hospital (GH) spoilers for Monday, April 6, tease that some exciting scenes are on the way. Before we dive in, we should note that GH will be airing a classic episode on Friday, April 3. General Hospital will jump right back in the action with a new show on Monday, so let’s discuss what’s next.

For starters, Nikolas Cassadine (Marcus Coloma) will wonder if his marriage to Ava Jerome (Maura West) will have unanticipated consequences. Things are complicated and should get even more complicated soon, but Nik will hang in there. Ava will insist they’re family now and should act like it, so they’ll keep up their happy husband and wife charade around town.

Over with Josslyn Jacks (Eden McCoy), she’ll get updates on Trina Robinson’s (Sydney Mikayla) latest round of drama. After Cameron Webber (William deVry) brings Joss up to speed on the situation surrounding Marcus Taggert (Real Andrews), Josslyn will worry. Cameron may think Trina wants time to herself right now, but Joss won’t be convinced that’s the case.

If Trina needs her, Joss will want to offer support. She’ll at least hope to track Trina down and make the offer. In the meantime, Trina will be busy barging in Jordan Ashford (Briana Nicole Henry) and Curtis Ashford’s (Donnell Turner) place. GH fans know Trina keeps cycling through all the stages of grief, so Monday it’ll be back to anger.

As Trina rushes through the door, she’ll demand to know where Jordan is. Curtis may admit Jordan’s handling police matters – and that’s exactly what she’ll be doing. At Pentonville, Jordan will make it clear that she expects her son back. She’ll call for TJ Ashford’s (Tajh Bellow) release, but Cyrus Renault (Jeff Kober) will point out that he’s not out yet.

Of course, Laura Collins (Genie Francis) cooked up a plan to have Cyrus transferred to Ferncliff, but Robert Scorpio (Tristan Rogers) warned it wasn’t going to work. Robert suggest it would look like what it was – a ploy to keep Cyrus locked up. Laura wondered what other options they might have, so it seems she’ll settle on another one with Robert and Kevin Collins (Jon Lindstrom).

Unfortunately, this backup plan isn’t going to work. An enraged Laura will demand to know what happened after the scheme falls through, so Robert will admit Cyrus had a connection. Jordan knows TJ’s life is at stake, so she’ll pull every string she has to.

General Hospital’s preview video for Monday shows Jordan saying, “You got your precious freedom, Cyrus.” Jordan will keep pushing for TJ’s freedom as well – and TJ will indeed return to his loved ones soon.

Other General Hospital spoilers say Jason Morgan (Steve Burton) will stand by his push for time apart. Jason would love nothing more than to be with Sam McCall (Kelly Monaco) and enjoy their family, but that’s just not possible. The stakes are higher than ever, so Jason’s worried about keeping Sam protected.

Jason will insist that they can’t do this anymore; they have to steer clear of each other or else Sam could end up back in prison or worse. However, we should note Sam and Jason will wind up stealing time together in the coming weeks. It sounds like their bond will simply be too strong to resist!

Until then, Carly Corinthos (Laura Wright) will wonder what Sonny Corinthos (Maurice Benard) is going to do. Whether this crisis involves Cyrus or something else, Carly will definitely be concerned.

Sonny’s planning to take Cyrus out once he’s free, but it’s obviously not going to be that simple. GH may offer a hint of the complications ahead in Monday’s episode.

Finally, Ava Jerome (Maura West) will pass along a warning to Nina Reeves (Cynthia Watros). Ava knows what it’s like to get sucked into Nelle Benson Archer’s (Chloe Lanier) twisted web, so she may argue Nina should think twice before letting it happen to her!