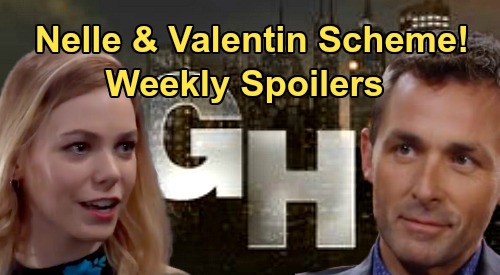 General Hospital (GH) spoilers for the week of April 6-10 tease that some shockers are on the way. First, Carly Corinthos (Laura Wright) will be pushed to her breaking point. It sounds like Nelle Benson Archer (Chloe Lanier) will be on a mission to drive Carly up the wall, so expect some explosive clashing.

Over with Michael Corinthos (Chad Duell), he’ll plot his next move and worry about what the future holds. There’s nothing more important to Michael than Wiley Quartermaine-Corinthos (Erik and Theo Olson). Michael will keep doing his best to put Wiley first, but that could get tougher as Nelle’s tactics get bolder.

Bobbie Spencer (Jacklyn Zeman) will get some troubling updates, so that could be related to the custody case. Nina Reeves (Cynthia Watros) will try to talk some sense into Nelle, but Nelle will be adamant about doing things her way.

Michael will be stressed to the max as a result – and Willow won’t be able to get Wiley off her mind. There’ll be this deep, growing concern about Nelle and what she’s capable of.

Nelle will eventually bump into Valentin Cassadine (James Patrick Stuart), which sets up the potential for more scheming. Soon after this encounter, Michael will feel intimidated. If Valentin helps Nelle pull off her next strategy, that could certainly give Michael another reason to worry.

Michael doesn’t know Valentin’s been helping Nelle, but what really matters is who’s winning and who’s losing. It sounds like Michael will believe he’s losing as they prepare for this custody battle. That could lead to some desperate strategies of his own, so stay tuned to see what Michael does next.

We should also mention a special episode that’ll be all about Carly and her past. This will lead to some major revelations – including a massive secret that’ll shake up the canvas. There’s a good chance that’ll tie in with Nelle being Nina’s biological daughter.

That bombshell should be brewing for Nina down the road, but she’ll get a different surprise for now. This one will come courtesy of Jasper “Jax” Jacks (Ingo Rademacher), so perhaps he’ll have a romantic gift. Charlotte Cassadine (Scarlett Fernandez) certainly isn’t going to like it if Jax and Nina get any closer!

Hamilton Finn (Michael Easton) will hope to give Violet a birthday to remember, but some disastrous memories may be made instead of pleasant ones! Let’s just hope someone can usher Violet out before things get ugly.

Will Peter be exposed or simply face more public accusations? Liesl Obrecht (Kathleen Gati) will certainly hope Peter goes down soon so she can get her freedom back.

As for Jason Morgan (Steve Burton), he just won’t be able to stay away from Sam McCall (Kelly Monaco). Jason will keep pushing for distance, but he’ll break down and steal some moments with Sam anyway. It’s just too hard for Jason and Sam to fight their connection.

TJ Ashford (Tajh Bellow) will also come home to his loved ones in the week ahead, so that’s fantastic news. Jordan Ashford (Briana Nicole Henry), Molly Lansing-Davis (Haley Pullos) and everyone else who loves TJ should be relieved. GH fans won’t want to miss all the happy reunions.

General Hospital spoilers also point to an intriguing message for Lulu Spencer (Emme Rylan). Laura Collins (Genie Francis) will intercept this message, so could it be a letter from Dante Falconeri (Dominic Zamprogna)? If so, how will Laura choose to handle this? It’s difficult to imagine Laura withholding the message, but she might offer some advice along with it and try to protect Lulu’s heart.

Some gripping GH episodes are coming up, so don’t miss all the action. CDL’s the place to be for hot General Hospital spoilers, updates and news.