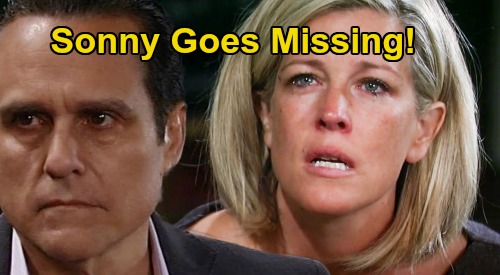 General Hospital (GH) spoilers tease that Carly Corinthos (Laura Wright) will have a reason to be concerned. Sonny Corinthos (Maurice Benard) has certainly been having a rough time lately. Between all the Cyrus Renault (Jeff Kober) mayhem and Mike Corbin’s (Max Gail) rapid decline, Sonny’s struggling to cope.

Carly resorted to drastic action by locking Nelle on the roof and forging her surgery signature. Unfortunately, it looks like that incident may come back to bite Carly down the road.

That’ll just be one more thing for Sonny to fret over – and GH spoilers say he’ll indeed fret during the week of April 6-10. Sonny will feel like Carly’s spiraling out of control, so he may fear that she’ll inadvertently cost Michael a win in court. When it comes to Nelle, Carly just can’t resist pushing things too far.

The fact that Sonny’s so worried about that and everything else will add to Carly’s worries, too. It seems the entire Corinthos clan will just be one big mountain of concerns. Everyone’s stress level is through the roof, but their problems aren’t going away anytime soon.

During the week of April 13-17, Sonny will face some disturbing news. Will that tie in with Cyrus or Mike? Either way, more trouble’s brewing. General Hospital spoilers say Carly will be on edge when Sonny doesn’t come home one night.

Carly might try to tell herself Sonny just got busy and is running late. As the minutes turn to hours, Carly won’t be able to convince herself of that anymore.

There’s a good chance Sonny will still be missing in the morning. Regardless, Carly should be a frantic mess when her attempts to reach Sonny are unsuccessful. Since there’s been so much mob drama, this isn’t a great time for Sonny to suddenly disappear!

Carly may fear the worst and imagine Sonny bleeding out in a ditch somewhere. She might suspect Sonny was the victim of Cyrus’ attack.

It’s possible Sonny will indeed be kidnapped or injured, but it seems more likely that Sonny will be staying away by choice. Perhaps Sonny’s disturbing news will involve Mike’s death. Sonny may take some time to process those grim updates on his own.

Of course, it’d be nice for Sonny to give Carly a heads-up. It’s never a good idea to leave your wife out of the loop when a mob war’s going on. Nevertheless, Carly should be relieved if this turns out to be a false alarm. She just needs Sonny alive and well! Carly and the rest of the family can get Sonny through anything else.