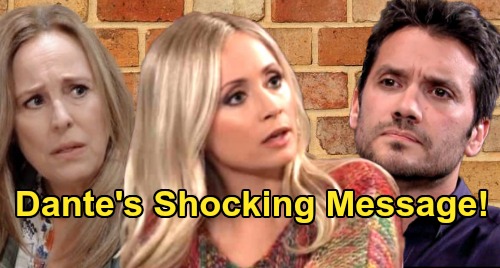 General Hospital (GH) spoilers tease that Laura Collins (Genie Francis) will intercept a special message meant for her daughter. Someone will be reaching out to Lulu Spencer (Emme Rylan), so could it be Dante Falconeri (Dominic Zamprogna)? Let’s consider all the hints and try to see where this hot plot might be headed.

It’s possible Laura will get her hands on a message sent from someone like Brook Lynn Quartermaine (Amanda Setton). However, Brook Lynn isn’t shy about speaking her mind. There’s usually no need for messages when it comes to Brook Lynn. She’s a “get in your face and tell you how it is” kind of gal.

There’s also a chance it’ll be something more mundane like a change of date night plans or something along those lines. Laura might hear from Dustin Phillips (Mark Lawson) and suggest she could pass along the updates herself.

Still, the use of the term “intercept” could be significant in this case. It could indicate that Laura will learn some sensitive information and want to handle this delicately.

Robert Scorpio (Tristan Rogers) hasn’t been very in the loop on Dante lately, but he planned to find out more after his recent chat with Olivia Quartermaine (Lisa LoCicero). Perhaps Robert will succeed and score a message from Dante.

That might be something Laura will discover and feel the need to intercept. It’d be better for Lulu to hear it from her mom, who knows how to break news gently.

GH has been mentioning Dante a lot, so a comeback is always possible. There’s even been some General Hospital buzz pointing to Dante’s return for Mike Corbin’s (Max Gail) upcoming funeral. Although there’s no guarantee that return will pan out, it’s worth mulling over based on the clues. GH fans can certainly hold out hope!

Regardless, this intercepted message is intriguing. It sounds like Lulu may at least hear from Dante, which could bring some mixed feelings. In some ways, it might be comforting for Lulu.

In other ways, it could be a tough reminder of what Lulu’s lost. Lulu has been trying to move forward with Dustin, but this is the kind of thing that could cause a major setback.