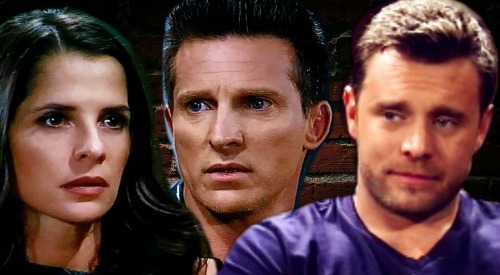 General Hospital (GH) spoilers tease that there’s one thing the ABC soap could really use. Everyone loves a good love triangle, but GH’s offerings have been rather ho-hum in that department lately. Let’s consider what makes a love triangle story worth doing and consider a juicy one General Hospital could deliver.

For starters, a truly good love triangle needs two very different yet viable options. Fans may root for one side or the other, but we should at least be able to see why the character at the center would choose either of those sides. Of course, chemistry is also important all around!

Alexis Davis (Nancy Lee Grahn) has feelings for Neil Byrne (Joe Flanigan), but they’re arguably lacking when it comes to chem. Alexis and Julian Jerome (William deVry) have no problems with chemistry, but Julian looks like a total jerk after that outburst at GH. It’s tough to find a side to root for.

Alexis’ sort-of love triangle is a mess – and honestly isn’t much of one since General Hospital seems reluctant to ever put Alexis back with Julian anyway. What GH needs is a love triangle with chemistry on both sides and two options that make perfect sense. They could have the perfect storm for that if Drew Cain (Billy Miller) reentered the picture.

“JaSam” fans are always going to love Jason Morgan (Steve Burton) and Sam McCall’s (Kelly Monaco) classic love story. Sam and Jason’s chemistry is tough to beat in their eyes. Of course, other fans miss Sam and Drew together. That “Killy” chem reigned supreme for some viewers out there.

The fact that GH had supporters on both sides was a good thing. If fan wars get underway, it means a love triangle is being done right! General Hospital viewers need to be invested enough to fight for the couple they want.

There are still “Dream” shippers hoping Drew will come back from the dead for a reunion – just like there are “JaSam” fans who say protect them at all costs!

Plus, Drew was a very different man than Jason. In the end, Drew settled into his role at Aurora Media and provided another style of living. Drew was a safer option for Sam in some ways, but that’s not necessary a bad thing if you’ve got a family to think about.

Jason is always going to be a “jump headfirst into danger” kind of guy, so there’s untapped potential with a Drew-Sam-Jason love triangle. GH could stand to revive it, especially if the Cyrus Renault (Jeff Kober) chaos puts Scout Cain (Ella Ramacieri) and Danny Morgan (Porter Fasullo) in peril. It could be a reminder of the damage Jason’s connection to the mob can do.

“JaSam’s” bond is unbreakable, but that doesn’t mean Sam couldn’t make another choice. The angst of walking away for complicated reasons could provide a great story. Watching Sam fall for Drew as Drew and not as Drew thinking he’s Jason would also be interesting.

Bottom line, Drew’s return could set up an exciting love triangle and give Kelly Monaco a chance to shine with both Billy Miller and Steve Burton. This love triangle was never fully explored when Drew was on canvas, but it’s not too late to bring it back!

We’ll keep you posted as other GH news and updates roll in. Would you like to see Drew come back for a love triangle with Jason and Sam? CDL’s your hotspot for new General Hospital spoilers, updates and news.