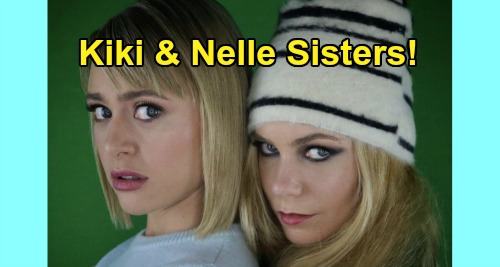 General Hospital (GH) spoilers has some fun news to pass on about a couple of popular GH stars. Chloe Lanier, who portrays Nelle Benson Archer on the ABC soap, recently posted a photo on Instagram that’s got her fans buzzing. As you might know, Chloe is good friends in real life with Hayley Erin, who portrayed Kiki Jerome on GH back before the character was murdered by Ryan Chamberlain (Jon Lindstrom).

Chloe posted a photo of herself posing with Hayley, along with the following caption: “brb just kidnapped @hayleyerin13 for a sec. #aim #socialdistancing #thesims4.” It was the opportune time for this post, since it’s just been revealed on GH that Nelle is Nina Reeves’ (Cynthia Watros) long-lost daughter.

As GH viewers know, it was shown last week on GH that Nelle is in possession of the other half of Nina’s half-heart pendant, and that she has had the pendant since she was a young child. That appears to make Nelle Nina’s long-lost daughter, and that also means that Nelle and Kiki are half-sisters.

GH viewers will remember that Silas Clay (Michael Easton) and Ava Jerome (Maura West) are Kiki’s parents, while Silas and Nina are Nelle’s parents. Nelle will probably be pretty upset to learn that she had a real sister – something she’s always wanted – and that she never had the opportunity to get to know her as one. 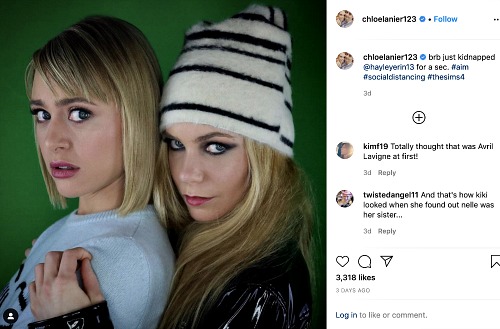 But in real life, Chloe and Hayley seem to enjoy a great relationship, and Chloe’s followers have really enjoyed the photo that she posted. “Two incredible actresses,” one fan commented in response to Chloe’s post. And another said: “So beautiful – looking fierce.”

Other fans commented on the recent goings-on on the show. For example, one person said: “I knew Nelle was Nina’s daughter. Now let the fireworks begin.” And another fan commented: “Love u both. So happy ur character is back on #GH.”

Of course, right now on the show it’s unclear exactly how Nelle and/or Nina will find out that Nelle is Nina’s long-lost daughter, but we suspect it will have something to do with Nelle seeing the half-heart necklace that Nina is continuously fiddling with in her office at Crimson.

Given that Nelle is now Nina’s assistant at Crimson, it seems like it’s only a matter of time before Nelle sees the other half of her half-heart pendant and starts putting the pieces together. We’re looking forward to watching Nelle come to terms with her new family members, including the sister that she’s already lost!

What do you think of the fact that Nelle and Kiki are sisters? Stay tuned to the ABC soap and keep CDL bookmarked for all the hot General Hospital spoilers and news.