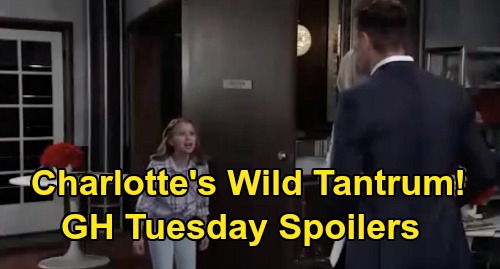 General Hospital (GH) spoilers for Tuesday, April 28, tease that Brando Corbin (Johnny Wactor) will worry about what TJ Ashford’s (Tajh Bellow) figured out. TJ just looked at Molly Lansing-Davis’ (Haley Pullos) paperwork and noticed a problem, so Brando will be nervous about what that might be. He’d really like to wrap this conversation up and send TJ on his way since there’s so much at stake for Molly.

Brando will naturally ask what’s wrong and hope it’s nothing serious. He doesn’t need any red flags that might connect him to Molly as more than her mechanic. While Brando’s stuck sweating it out at the auto garage, Molly will make a big decision. She’ll tell Kristina Corinthos-Davis (Lexi Ainsworth) and Sam McCall (Kelly Monaco) that she knows exactly what she has to do.

It seems likely Molly will decide to be honest with TJ, but that plan isn’t going to pan out. Once Molly realizes TJ picked up her car and met Brando, all rational thoughts may evaporate.

Molly should go into protective mode again and determine that TJ never needs to know about her betrayal. General Hospital spoilers say Molly will tell more lies later this week, so she’ll dig a deeper hole for herself.

In the meantime, Lulu Spencer (Emme Rylan) will be suspicious about Valentin Cassadine’s (James Patrick Stuart) change of heart and Laura Collins’ (Genie Francis) sudden faith in him. Lulu will wonder when Valentin said he was putting Charlotte Cassadine (Scarlett Fernandez) first.

Since Lulu probably isn’t going to let this go, Laura may fill her daughter in on all the details. Thanks to Laura’s latest discussion with Valentin, she truly believes he’s seen the light about doing what’s best for Charlotte.

It looks like Valentin will open up to Alexis Davis (Nancy Lee Grahn) about that as well. He’ll mention walking away, so we’ll see if Alexis approves or perhaps thinks there could be a better solution.

Of course, there’s one person who definitely wouldn’t agree with any of this and that’s Charlotte herself. GH viewers know Charlotte’s already been causing trouble, but there’ll be more issues on Tuesday. General Hospital spoilers say Charlotte will have a major meltdown at Crimson.

When Charlotte spots Nina in Jasper “Jax” Jacks’ (Ingo Rademacher) arms, she’ll order Jax to leave Nina alone. Nina will try to calm Charlotte down and explain things, but Lulu will ultimately have to be called. It’s clear that Charlotte’s a mess who needs some serious help.

Over with Sonny Corinthos (Maurice Benard), he’ll be ready to talk business with Cyrus Renault (Jeff Kober). Sonny will insist that he’s going to do the talking, which Cyrus may not appreciate.

There’s already been tension at this meeting, so that should continue on Tuesday. However, it seems Cyrus and Sonny will manage to reach a “deal.” They may pretend they can find a path to peace, but that’s only because they want to lower each other’s guards.

Cyrus will plot Jason Morgan’s (Steve Burton) murder while Sonny focuses on killing Cyrus, so this battle’s getting serious. As soon as Cyrus stops looking for Sonny out of the corner of his eye, Sonny will plan to take him out!

“You start by getting rid of Jason Morgan.” #GH pic.twitter.com/wzFsEuqLyG