General Hospital Spoilers: Could Alexis & Brando Land in Bed Together – Molly’s Mess Gets Even Messier? 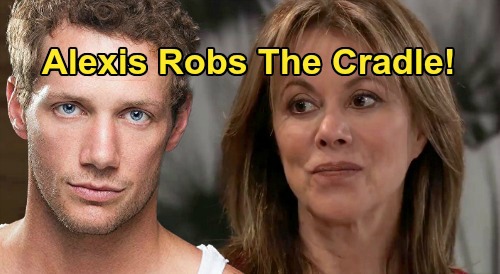 General Hospital (GH) spoilers reveal that Alexis Davis (Nancy Lee Grahn) is stressed out and feeling totally lost. Alexis doesn’t know who she is if she can’t be a lawyer – and that’s exactly what Alexis can’t do! Now that Alexis has been disbarred, she’s struggling to figure out who she is without her work.

Alexis also seems to be wondering if Neil Byrne (Joe Flanigan) was really worth losing her career over. There’s no guarantee their spark will ever grow into something more, especially now that Neil’s lost his career well. Neil and Alexis’ romance has hit another hurdle, so maybe Alexis could use someone else to rev up the passion with.

Even if GH still puts Alexis and Neil together down the road, there’s no reason why Alexis can’t have some fun in the meantime! It’d actually be appropriate for Alexis to have a wild hookup under the circumstances.

Alexis is having an identity crisis, so she could easily do some things that are out of character. Landing in bed with a terrible choice would be reasonable right about now. Plus, General Hospital has been including more unexpected passionate encounters lately – at least they were before new episodes ran out.

Could Alexis get an unexpected passionate encounter of her own? If so, which lucky hunk might Alexis get busy with? Let’s consider how Alexis ogled Brando Corbin (Johnny Wactor) when he was working out at the boxing gym. Alexis thought Brando was quite cute and admitted it to Sam McCall (Kelly Monaco).

After checking Brando out, Alexis could definitely see why Molly Lansing-Davis (Haley Pullos) slept with him. Alexis understood that anyone in that position would be tempted by such a hot guy. Will Alexis also be tempted? Could Alexis and Brando hook up to make Molly’s mess even messier?

Brando seems to hit the sheets without much thought based on how fast he did it with Molly. Although Brando and Alexis would realize what an awful idea this is, that wouldn’t stop them from following through. Alexis couldn’t fight temptation when she went to bed with Neil, and she’s bound to be even more vulnerable now that she’s out of a job.

Just imagine the horror on Molly’s face if she found out Brando slept with Alexis, too! Not to mention Sam’s shocked disapproval. Kristina Corinthos-Davis (Lexi Ainsworth) could even weigh in and add to all the family drama. It’d be a giant nightmare for the Davis girls.