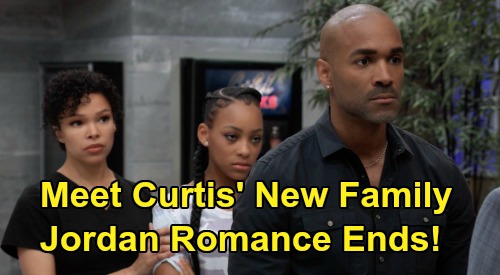 General Hospital (GH) spoilers tease that major changes seem to be in the works for Curtis Ashford (Donnell Turner). Curtis has been stuck in a pretty dull love story with Jordan Ashford (Briana Nicole Henry) for a while now. They’ve been given some drama through Cyrus Renault (Jeff Kober), but there’s nothing very exciting about Jordan and Curtis’ relationship.

Furthermore, some GH fans just aren’t feeling the onscreen chemistry between Turner and Henry. Although Curtis might’ve worked with Vinessa Antoine’s Jordan, recasts can change the game on soaps. It’s wise to look at the new chem and make decisions about pairings based on that.

Maybe it’s time to move Curtis in another direction – and that could be exactly why they hired Brook Kerr to play Portia Robinson. GH writers gave Curtis a connection to Portia since they were involved many years ago – right around when Trina Robinson (Sydney Mikayla) was conceived.

Portia insisted that Marcus Taggert (Real Andrews) was indeed Trina’s father, which was a huge relief to Curtis. That’s especially true since Trina blames Curtis for Taggert’s death and hates his guts.

Even so, that didn’t stop Curtis from leaping into papa bear mode with Cyrus recently. Curtis defended both Portia and Trina. It was like a new family was forming right in front of our eyes.

It’s possible Curtis and Jordan could simply divorce, but there could be a far darker possibility. Thanks to a Soap Opera Digest blind item, we know one soap’s planning to kill a character off.

There are strong hints pointing to GH being the soap that happens on. Jordan is certainly at risk due to her link to Cyrus – the deadliest man in town right now.

If Jordan dies, that could push Curtis into Portia’s arms for comfort. Of course, the truth about Trina will likely come out at some point. Curtis is most likely Trina’s dad, despite what Portia claimed before.

General Hospital spoilers say Curtis may have some work to do if he hopes to win Trina over, but we have faith a sweet guy like him would do it.

That’s something Portia would love to see in the aftermath of Taggert’s demise: Trina bonding with her new father figure. No matter how Jordan and Curtis’ relationship ends, it seems likely that it will.

That could pave the way for Curtis and Portia’s hot romance. They could build a family with Trina after Curtis plays the knight in shining armor with Cyrus.