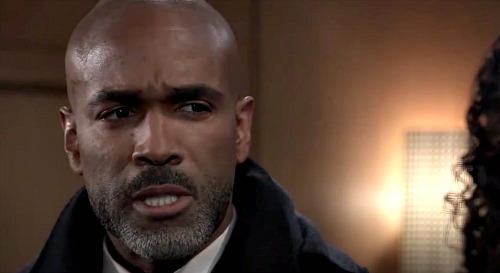 General Hospital (GH) spoilers tease that everything is far from ok in Curtis Ashford (Donnell Turner) and Jordan Ashford’s (Briana Nicole Henry) marriage. As GH viewers know, Curtis freaked out after her found out that Marcus Taggert (Asante Jones) was alive and well, and he came down hard on Jordan for keeping him in the dark about Taggert’s faked death for all these months.

Curtis was irked that Jordan let him keep beating himself up about not saving Taggert, all the while she knew the truth.

Of course, this came after Jordan and Curtis spent weeks talking about how honesty was important to their marriage and Curtis insisted that they should never keep secrets from each other.

That made Jordan’s decision to withhold information from Curtis all the more egregious in his eyes. Now it seems that Jordan and Curtis’ relationship is on the rocks, as Curtis has just walked out on Jordan in disgust.

Well, we suspect that it won’t be long before Curtis finds himself needing to vent about everything he’s gone through and about how Jordan withheld the truth from him.

Curtis might turn to Portia Robinson (Brooke Kerr) for support, especially since Portia was also kept in the dark about Taggert’s faked death. In fact, we wouldn’t be surprised if Portia steps into offer Curtis some comfort in the wake of Jordan’s big lie and if Portia and Curtis get closer.

Of course, if that happens, then there’s going to be someone who’s probably not going to be happy about that – Trina Robinson (Sydney Mikayla). Trina hasn’t been a big fan of Curtis or Jordan from pretty much the get-go, and she might give her mom grief for spending time with Curtis.

General Hospital spoilers hint that Trina will start pushing for Taggert and Portia to get back together now that Taggert’s alive and well. It would make sense that Trina would want her parents together, and she’s still not a big fan of Curtis.

If Curtis does fail to patch things up with Jordan and he drifts toward Portia, then Trina’s probably not going to be happy about that and she’ll probably make some noise about it to her mother.

Of course, Jordan won’t be happy about the situation, either, and she’ll probably do her best to patch things up with Curtis.

But Curtis has been stung pretty badly by the revelation that Taggert’s alive, not to mention that fact that Sonny Corinthos (Maurice Benard) and Jason Morgan (Steve Burton) knew pretty much the whole time that Taggert survived the shooting.

Curtis is probably going to give Jordan a hard time before he relents to getting back together, and by then he may have started to rekindle things with Portia.

We’ll see what happens, here, but something tells us that the situation between Curtis, Jordan, Portia, and Trina is going to get more complicated. Do you think that Curtis will go to Portia for comfort as he and Jordan are having problems?

Stay tuned to the ABC soap and remember that CDL is your one-stop shop for all the soap news and spoilers. We’ve got you covered with everything General Hospital, including our daily episode recaps.