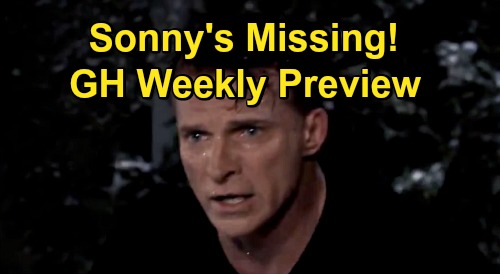 General Hospital (GH) spoilers preview teases that viewers are in for an intense holiday week on the ABC soap. But before we get into that, we have a brief programming note. ABC will air an encore episode of General Hospital on Thursday, December 24, for the Christmas Eve holiday.

Then, on Friday, December 25, the show will be pre-empted entirely for sports programming. But it looks like there will be plenty of action earlier in the week, as the new GH preview shows Jason Morgan (Steve Burton) dealing with a harrowing situation.

As GH viewers will remember, last week left off with Sonny Corinthos (Maurice Benard) and Julian Jerome (William deVry) falling into a cold winter river when the bridge collapsed.

Julian had apparently died, since Sonny couldn’t find a pulse on him, and Jason had just raced onto the scene to watch the bridge collapse and Sonny go down.

Well, from the looks of the GH weekly preview, Jason will do everything in his power to save Sonny. Jason is shown jumping right into the river off the bridge, in an attempt to fish Sonny out of the icy water.

Unfortunately, the preview makes it pretty clear that Jason won’t be able to find Sonny, and Jason looks absolutely devastated as he realizes that Sonny may be lost forever.

The preview also shows a cop instructing one of his colleagues on the phone to “bring the body here.” That means that the cops or Jason will find a body in the river, but General Hospital spoilers say that it will be Julian’s body that’s recovered.

The promo shows someone unzipping a body bag, probably to show Jason who the cops pulled from the river for an ID.

Viewers are warned to prepare for the unthinkable, but since Sonny’s going to live on, the most likely scenario here is that the body in that body bag will be Julian’s, and Sonny will probably remain missing for some time.

That meshes with other General Hospital spoilers that say that Mike Corbin’s (Max Gail) spirit will appear to Sonny, probably as he fights for his life and contemplates going to the other side.

The new GH promo also shows a quick scene of Carly Corinthos (Laura Wright) looking out the window, presumably at the Corinthos house, as she gazes out to see cop car lights flashing.

Is Carly going to be told that Sonny is missing and presumed dead in the river? It certainly looks like that’s the way it’s going to go, which would mean that Carly and the Corinthos family will be clinging to a lot of hope this holiday season, as they wonder if Sonny somehow survived.

We should point out that viewers could get their very last glimpse of Julian this week as it’s Julian’s body in the body bag. It’s going to be a big week on the ABC soap, so stay tuned and don’t miss any of the action!

Remember, CDL is here for you with all the hot new General Hospital spoilers, updates, and news. Check out our daily episode recaps, too!