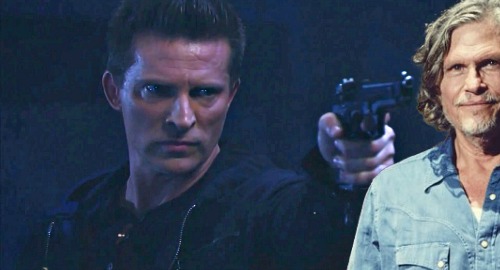 General Hospital (GH) spoilers tease that Cyrus Renault (Jeff Kober) is making a huge mistake. Any GH fan who’s been watching long enough will tell you that Sonny Corinthos (Maurice Benard) and Jason Morgan (Steve Burton) always win. They may face some tough blows and temporary defeats along the way, but Jason and Sonny aren’t the kind of guys you can truly take down.

Cyrus is mainly after Jordan Ashford (Briana Nicole Henry), but Sonny and his loved ones have become part of this plot as a result. Since Cyrus intends to burn Port Charles to the ground, pretty much every PC resident is at risk.

Laura Collins (Genie Francis) and Robert Scorpio (Tristan Rogers) will team up against Cyrus soon, but they tend to be a little too by the book. When it comes to someone like Cyrus, you really have to fight fire with fire. Cyrus is as ruthless and dirty as they come, so Sonny and Jason need to get down in the mud with him.

That brings us to what may be Cyrus’ fatal error. GH fans know Cyrus had TJ Ashford (Tajh Bellow) kidnapped to use as leverage over Jordan. Now Cyrus wants out of prison, so Jordan’s on the verge of giving this villain his freedom and exoneration. What happens if Cyrus indeed gets what he wants?

Cyrus may wish he’d stayed behind bars and kept himself out of trouble! This GH baddie is just too nasty to survive his stint. Cyrus must die – and there’s a good chance he will down the road. Once Cyrus is out of Pentonville, he could easily target Sonny and the people he cares about again. That might be the last straw that sends Sonny over the edge.

Since Jason is Sonny’s right-hand man, he’s sure to be worried about his family as the chaos revs up. That’s especially true since Sam McCall (Kelly Monaco) will inevitably get more involved.

Sam’s invested in making sure TJ gets home to Molly Lansing-Davis (Haley Pullos), but she may want to help even if TJ’s returned safely. Sam doesn’t usually like to let Jason handle things on his own.

However, it’s doubly important for Sam to back off in this case. There’s extreme danger for starters, so Jason will want to keep Sam, Danny Morgan (Porter Fasullo) and Scout Cain (Ella Ramacieri) as far away from this as possible. Jason also won’t want Sam doing anything that might violate her parole and land her back in prison.

General Hospital spoilers say Jason will deliver a harsh warning during the week of March 30-April 3. It’ll lead to some bickering with Sam as well as a decision from Jason.

He’ll think they need to maintain the appropriate distance for now. It sounds like Jason will hope to help Sonny eliminate Cyrus without Sam anywhere near the deadly drama.

Will Sam go against Jason’s wishes and join the mayhem anyway? We’ll give you updates as other GH news rolls in, but it certainly looks like we’re building toward Cyrus’ murder.