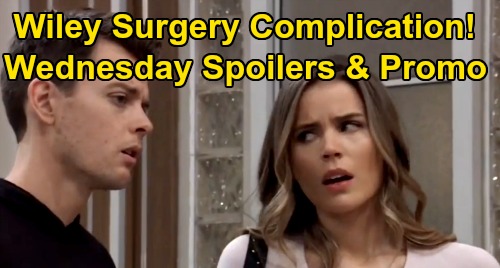 General Hospital (GH) spoilers for Wednesday, March 25, tease that Michael Corinthos (Chad Duell) will get even more upsetting news. GH fans just saw Michael race downstairs at the Quartermaine mansion as he vowed to pull the car around. A panicked Michael insisted they had to get Wiley Quartermaine-Corinthos (Chad Duell) to the hospital – and that’s exactly what they’ll do.

At GH, Michael and Sasha Gilmore (Sofia Mattsson) will get updates from Monica Quartermaine (Leslie Charleson). When Michael wonders the next step is, Monica will admit that it’s surgery. Wiley has an inherited heart condition that could be giving him trouble, but it’s also possible Wiley had an accident upstairs and needs surgery for his injuries.

If Michael inadvertently let Wiley get hurt in his care, that could certainly bolster Nelle Benson Archer’s (Chloe Lanier) custody case. Speaking of Nelle, Monica will point out that she’ll need two signatures for this surgery: both Michael and Nelle’s. That complication is obviously going to irritate Michael, but he’ll want to get Nelle over there and make her sign off ASAP. Wiley’s well-being always has to come first.

Before Nelle heads to GH, she’ll have a run-in with Carly Corinthos (Laura Wright). General Hospital spoilers say Carly will show up at Crimson and get a huge shock. Naturally, Carly won’t be pleased when Nelle gloats about her new job, but Nina Reeves (Cynthia Watros) will clarify her motives at some point this week. This isn’t about helping Nelle; it’s about keeping her on a tight leash.

Other General Hospital spoilers say Portia Robinson (Brook Kerr) will scold Trina Robinson (Sydney Mikayla). After Portia finds Trina at the gallery, she’ll demand to know what her daughter’s doing there. Trina won’t look happy about Portia showing up and crashing her safe space. Can’t Portia understand that Trina just wants to throw herself into the art world for a bit and decompress? Apparently not!

It looks like Portia will order Trina to head home, which should bring another opportunity for Ava Jerome (Maura West) backlash. Ava isn’t doing anything except showing Trina love and support, but Portia seems to think Ava’s crossing a motherly line. In Wednesday’s episode, Portia may once again make it clear that Trina’s HER daughter, not Ava’s.

Next, Molly Lansing-Davis (Haley Pullos) will catch up with Sam McCall (Kelly Monaco) and voice her frustration. They’ll discuss missing TJ Ashford (Tajh Bellow) and Jordan Ashford’s (Briana Nicole Henry) communication with him. Molly will wonder why Jordan wouldn’t tell her if she was in touch with TJ. It’ll leave Molly agitated as she continues to fret over where TJ is and when he’ll come home.

Of course, there are a few reasons why Jordan is leaving Molly in the dark. TJ hasn’t actually been in touch thanks to Cyrus Renault (Jeff Kober), so there’s that for starters. Jordan’s also pretty busy trying to meet Cyrus’ demands and make sure TJ doesn’t get killed. Appeasing Molly is the least of Jordan’s problems right now.

Jordan just decided that she has no choice but to give Cyrus what he’s wanted all along: freedom and a full exoneration. Curtis Ashford (Donnell Turner) didn’t like that idea at all, but Sonny Corinthos (Maurice Benard) agreed that’s exactly what Jordan has to do. However, it appears there’ll be another disagreement about the details of the plan.

Jordan wants to confess her own wrongdoing, but she’ll be asked to throw her team under the bus. It sounds like Sonny, Curtis and Jason Morgan (Steve Burton) will think Jordan should pin this on her dead colleagues. They surely wouldn’t mind! Jordan will object, but Jason will try to convince her that their alternative solution is the right one.

Sonny will also warn against retaliating, but we’ll see how that plan pans out as this hot plot continues. CDL will have all the latest GH details, so be sure to check back often for General Hospital spoilers, updates and news.