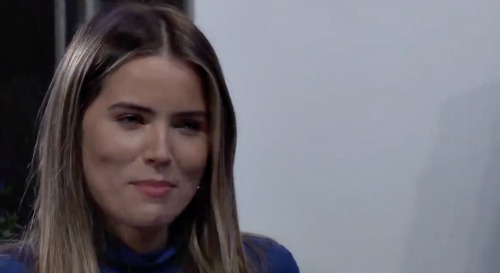 General Hospital (GH) spoilers tease that Sasha Gilmore (Sofia Mattsson) is very vulnerable right now. As GH viewers know, Sasha is down and out, and she’s been using drugs on a regular basis.

Sasha seems to be reaching the point of dependence on the drugs, as she’s been shown shaking and generally not caring as much about her appearance. It’s horrible to watch Sasha spiral, and it seems like perhaps Cyrus Renault (Jeff Kober) has been behind the whole thing.

After all, Sasha initially resisted using drugs, but she was targeted directly by a couple of young women who urged her to keep using. The women seemed to seek out Sasha, and one wonders whether Cyrus was deliberately behind this.

Cyrus could have targeted Sasha early on, seeing something in her that he thought could be valuable to his organization.

Well, it’s certainly the case now that Cyrus seems to be grooming Sasha for something. Cyrus hasn’t overtly hit on Sasha, so it doesn’t seem to be about that, but he has offered his friendship and more free drugs.

Could Cyrus be trying to get and keep Sasha hooked on drugs so that she needs him to help her out of her dark place? Cyrus could swoop in and appear to save the day for Sasha, getting her into rehab and becoming her hero.

And we doubt that’s all that Cyrus has in mind. Sasha is young, capable, and smart, and Cyrus might see something in her that he wants to bring into his organization.

Perhaps Cyrus is looking for someone to train to work with him in the business and to be his right-hand business associate. Cyrus could be looking toward the future and realize that he’ll need to have someone to take over his operations when he wants to step back in retirement.

And what better person to groom than Sasha? Cyrus probably assessed the situation and realized that Sasha essentially has no one right now.

Sasha has burned bridges with Nina Reeves (Cynthia Watros) and Michael Corinthos (Chad Duell), and if she keeps on using drugs in the short-term, then her career with Deception is going to be over and done soon.

Cyrus might be looking to tear Sasha down in order to build her back up so that she can help run his organization.

We’ll see what happens here, but we could be looking at a situation in which Sasha is groomed by Cyrus to become the next Cassandra Pierce (Jessica Tuck)!

Cyrus seems to be all about equality in his own warped way, so why not choose Sasha? And once Sasha gets to a low enough point, why wouldn’t she choose Cyrus as a mentor and father-figure type person?

Do you think that Cyrus has big plans for Sasha within his organization? Stay tuned to the ABC soap and be sure to keep coming back to CDL for the latest General Hospital spoilers, daily episode recaps, and news.

“This may be your last chance. Don’t blow it.” #GH pic.twitter.com/YI6wqicNDV