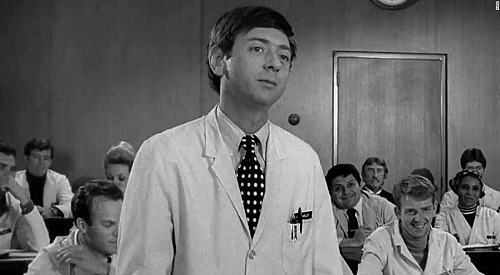 General Hospital (GH) spoilers reveal that one ABC soap alum has died. Danny Goldman was an actor and casting director who had quite a career in the entertainment industry. In addition to his role as Clarence Darrow on General Hospital, Goldman was the voice of Brainy Smurf on The Smurfs from 1981-1989.

Goldman brought Brainy Smurf to life once again on the Robot Chicken series for a few episodes. You may have also seen Goldman on classic shows like Happy Days, MASH, The Partridge Family, Colombo, Cagney and Lacey, Webster and more.

Goldman was also in Young Frankenstein back in 1974. In later years, Goldman was featured on The King of Queens as well as Criminal Minds.

Sadly, Goldman died on April 12 following a couple of strokes he had back in January. A friend of Goldman’s announced the sad news on Facebook, which included updates on the 80-year-old actor passing away peacefully at home. Goldman was surrounded by family and friends in his final moments, so that hopefully provided some comfort in the end.

“Danny was truly one of a kind,” Doug Ely said in his Facebook post. “He always had strong opinions and didn’t mind telling you about them. He was incredibly funny. He loved to root for the little guy and help wherever he could. He had a huge heart. We lost a good one…He will be missed.”

Ely’s post naturally brought plenty of other comments with praise for Goldman and what a wonderful man he was. This was a loss that hit hard for those who knew Goldman well. “He had a wonderful way of finding the humor in things and I loved that,” another Facebook post said. “He loved actors maybe because he was a good one. He respected actors maybe because he was one. He will be greatly missed.”

“Danny was a sweet and endearing supporter of the industry.. with equal respect for all aspects… creative, production, behind camera, in front of camera,” one more commenter said in support. It’s clear that people had so many good things to say about Goldman and his contributions to the industry – both as an actor and as a casting director.

GH fans certainly send their condolences to Goldman’s loved ones during this difficult time. A loss like this is never easy, but at least Goldman left behind a memorable career and legacy. There’s no shortage of fond memories being shared, so Goldman obviously lived a life worth living!