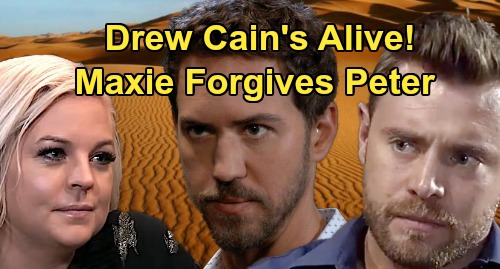 When Maxie vented to Peter, she talked about how Lulu worshipped her father, Luke Spencer (Anthony Geary). Since Luke’s far from a perfect man, Maxie thought Lulu should be able to see why Charlotte Cassadine (Scarlett Fernandez) adored her papa.

Later, Lulu gathered up her courage and defended Valentin to Lulu as well. As Lulu rattled off a list of Valentin’s crimes, Maxie quickly explained them away. She even brushed off Valentin shooting Nikolas Cassadine (Marcus Coloma) since Nik later turned out to be alive.

This is kind of an odd stance for Maxie to take. What’s with all the sudden Valentin support? Why is Maxie rushing to Valentin’s defense, especially after the way things went down between Valentin and Nina Reeves (Cynthia Watros)? It feels like a plot point to set up something else that’s brewing for Maxie.

Of course, one easy explanation is that Maxie’s becoming someone who can dismiss crimes easily. That could be important since Peter’s guilty of plenty! Is there a chance Peter could convince Maxie to forgive him?

Peter will definitely have a tough battle on his hands, especially since he framed Liesl Obrecht (Kathleen Gati). Liesl is someone Maxie cares about a great deal, BUT…Liesl isn’t exactly an innocent woman.

She isn’t guilty of what she’s currently accused of, but it’s not like Liesl is some sweet little lamb. If Peter spins this correctly, perhaps he can make Maxie see that it was a desperate decision.

As for Franco Baldwin (Roger Howarth) and Andre Maddox (Anthony Montgomery), they survived! No deadly harm, no foul – at least if we go by what Maxie said about Valentin and Nikolas. Peter could make Maxie see that he changed his mind and did whatever he could to make sure they avoided a grim fate.

All of Peter’s crimes are things Maxie could potentially get past in this frame of mind except for one: the hit on Drew Cain (Billy Miller). Maxie defended Nikolas’ “murder” because he later turned up alive, so maybe that could serve as a hint about Drew Cain being alive.

Will Peter reveal that Drew’s alive, too? Would that salvage “Paxie” since Maxie’s suddenly so willing to defend criminal behavior? By using Drew’s location as leverage to get off the hook, Peter might have a get-out-of-jail-free card. Peter could also erase the very worst of his secrets. If Peter’s able to undo Drew’s death, Maxie at least wouldn’t hate him quite as much!

Regardless, Maxie’s view of Valentin’s crimes was strange. This seems to run deeper than just giving a friend her opinion, so we’ll see how Maxie feels once Peter’s transgressions come to light.

General Hospital spoilers say some shockers are brewing as Peter’s exposure looms. As other GH news comes in, don’t forget to check back for updates.

Many General Hospital fans are holding out hope that Drew’s presumed death doesn’t stick! It’d be nice to see Billy Miller or even a Drew recast make a GH comeback. Do you think Peter’s exposure could set up Drew’s return? CDL’s the place to be for sizzling General Hospital spoilers, updates and news posts.