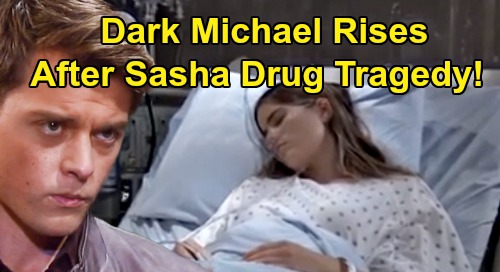 General Hospital (GH) spoilers reveal that Michael Corinthos (Chad Duell) is bound to have questions and concerns after Sasha Gilmore (Sofia Mattsson) spirals out of control. Before the week’s over, Sasha will once again turn to drugs as a way to cope with her pain and try to carry on. It’s been tough for Sasha to keep putting one foot in front of the other now that she’s lost the man she loves.

Of course, Michael Corinthos (Chad Duell) has no idea that Sasha and Harrison Chase (Josh Swickard) only pretended to cheat. Their “betrayal” was a difficult blow for Michael, but he handled it pretty well. Michael was so caught up in this Wiley Quartemaine-Corinthos (Erik and Theo Olson) custody case that he didn’t have time to dwell on the loss.

Michael’s new marriage to Willow Tait (Katelyn MacMullen) has already affected Sasha and will soon send her over the edge. What happens once Sasha hits rock bottom? Since GH writers have introduced a drug use plot, an addiction seems likely. That could build to Sasha’s overdose and potentially her death if that’s how General Hospital wants to take this.

Soap Opera Digest teased a deadly sendoff for one soap character, so GH might have one in the works. If Sasha indeed faces a grim fate, there’ll be plenty of blame to go around. Chad Duell is at his best when he’s playing “Angry Michael,” so this could be a real opportunity for him to shine.

Plus, Michael’s girlfriends often fall prey to this fatal curse! It wouldn’t be all that surprising if Sasha bit the dust. Michael might be taken aback upon first learning Sasha was driven to this point.

That’s when Carly Corinthos (Laura Wright) could admit there was more to the story. Carly might come clean about the faux affair and leave Michael furious that she never said a word.

Likewise, Chase would get an earful for setting this plot in motion and letting Michael believe the worst of Sasha. Michael would probably suggest it was no wonder someone as good and kind as Sasha lost control under those circumstances. Even Hamilton Finn (Michael Easton) could be held responsible if Michael realizes he was in the loop.

Naturally, Michael would blame Nelle Jerome (Chloe Lanier) most of all! He’d view Nelle as the source of all this deadly destruction and might become determined to avenge Sasha’s death. If Michael’s sharing custody of Wiley by then, it’d rev up his fight to push Nelle out of the picture for good.

If Sasha doesn’t survive her drug battle, it could take Michael down a dark path and perhaps scare Willow somewhat. Even if Sasha pulls through, Michael could still sink to some low places and resort to terrible tactics. Willow might see a sinister side of her husband that she never knew he had!