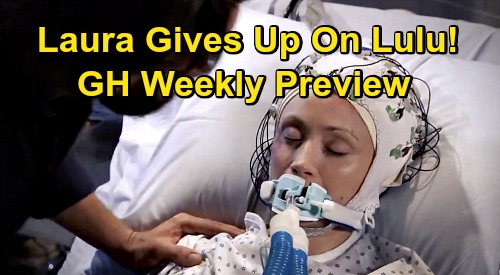 General Hospital (GH) spoilers tease that viewers are in for a big December preview for the week from November 30 to December 4 on the ABC soap. The new preview promo for the week of November 30 is out and it deals with some big situations that are unfolding this week on the show.

Brando looks like he can’t really talk freely, since Cyrus Renault (Jeff Kober) happens to be standing nearby. Maxie could be talking about the explosion in general, or some of the casualties or near-casualties that have taken place as a result.

Certainly, Maxie will be very upset over Lulu Spencer’s (Emme Rylan) demise, since Maxie and Lulu spoke shortly after the explosion and Lulu seemed fine.

Next, the GH promo moves to the tension that will escalate between Dante Falconeri (Dominick Zamprogna) and Laura Collins (Genie Francis) over Lulu’s condition.

Lulu is shown following her brain surgery unconscious and in some head contraption in the hospital, with Dante leaning in for a kiss. But there will be some conflict between Dante and Laura, as Dante is shown asking Laura if she’s giving up on her daughter.

This will surely have to do with the decision that the family will have to make regarding sending Lulu to long-term care. Lulu might just end up at Turning Woods in their long-term care wing, much like Lucas Jones (then played by Ryan Carnes) did when he was in a coma.

It looks like Dante won’t agree with that decision, and he may worry that Laura is sending her daughter off to die.

Laura looks pretty broken up in the promo, so she’ll probably explain to Dante that Turning Woods is a great facility and that she’s not “giving up” on Lulu by sending her there. In fact, it could be safer for Lulu at Turning Woods given hat Cyrus doesn’t run the place like he runs GH.

The promo turns next to the situation involving Alexis Davis (Nancy Lee Grahn) and Ned Quartermaine (Wally Kurth). As GH viewers know, Alexis and Ned had an affair a while back, and so far, it’s been their secret. The promo shows Ned over at Alexis’ place discussing the situation once again, so this issue isn’t dead for them.

“You’re the one who opted not to confess,” Alexis tells Ned, who looks upset over something. Exactly why Alexis and Ned are revisiting all this remains to be seen – perhaps Ned is feeling guilt over the whole thing and he’ll want to check in with Alexis and make sure that she isn’t going to say anything to Olivia.

Interestingly, Robert Scorpio (Tristan Rogers) appears to be on the scene with Ned and Olivia, unless this is a fake-out in the promo.

Of course, if Robert finds out about Ned and Olivia’s affair, then it’s going to be a real mess, since he’s good friends with Olivia Quartermaine (Lisa LoCicero) and could spill all the beans to her. We’ll see how this unfolds but the implication is that Ned is busted.

Finally, the new GH promo shows some shocking scenes between Julian Jerome (William deVry) and Ava Jerome Cassadine (Maura West) over at Wyndemere. Ava is shown ranting at Julian, telling him that innocent people are dead due to his actions.

Then Ava whips out a gun and shoots, and by the look on Julian’s face during this exchange, Ava’s not fooling around!

This is a huge development, since Julian could go down at the hands of his own sister.

Or is it all an elaborate setup by Ava to make Sonny and Jason think that Julian is dead? That’s an interesting possibility – and something that fans may be hoping for.

We should note, however, that Ava looks dead serious in the preview about killing Julian, and Julian looks horrible as Ava is ranting at him, so this could be the real deal!

It looks like we’re in for a very exciting week, so stay tuned! We’ll give you updates as GH news comes in. Stick with the ABC soap and don’t forget to check CDL often for the latest General Hospital spoilers, daily episode recaps, and news. We’ve got you covered!