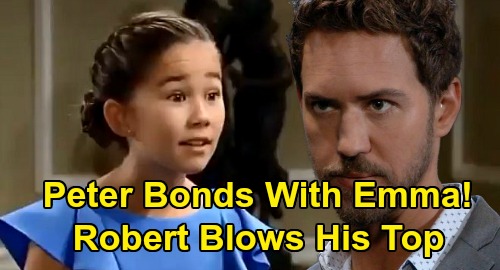 That’s why Robert agreed to a deal with Jason Morgan (Steve Burton) and Sam McCall (Kelly Monaco). He’s hoping they can bring him some hard evidence against Peter, but that’s going to take some time.

As for Robert, he’ll grow increasingly agitated about Peter’s presence in town. Robert will be sick and tired of Peter pulling the wool over everyone’s eyes, but he’ll try to keep his cool.

Emma will pop in for a visit and will naturally want to catch up with her grandparents, Robert and Anna Devane (Finola Hughes). The trouble is Anna will further delude herself into thinking Peter’s one of the good guys.

Anna wants so badly to believe that Peter’s turned his life around. Anna’s ignoring the warning signs and will continue to do so, even after they keep piling up. That’ll leave Hamilton Finn (Michael Easton) concerned and will set up some friction.

General Hospital buzz hints that Peter will bond with Emma while she’s visiting. It makes sense considering Peter’s great with kids. GH always likes to remind fans of that, but Robert isn’t going to like this one bit. It looks like Robert will find out about Peter connecting with Emma and completely blow his top.

Anna will want Peter to feel like a true part of the family. She won’t see why she should shut him out, but Robert will likely put his foot down. Since we know Anna and Finn will battle more Peter issues, Finn may admit he’s uncomfortable as well. He will not like the idea of Peter being around Violet Barnes (Jophielle Love) either.

General Hospital spoilers say protective Anna will fiercely defend Peter, so she’ll find herself in quite a war with Robert and Finn. They’ll team up to help Anna see the light, but it’s not going to be easy. Robert will need Jason to hurry up and provide that firm proof!

It sounds like some hot drama’s brewing. We’ll give you updates as other GH news comes in. Stay tuned to the ABC soap and don’t forget to check CDL often for the latest General Hospital spoilers, updates and news.