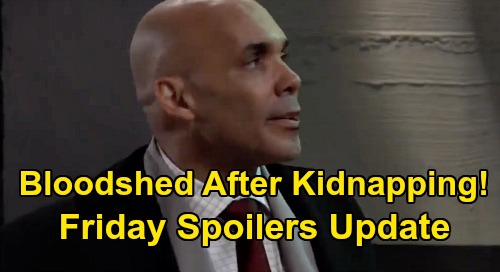 On Friday, Jason will give a stern warning over the phone. He’ll insist he’s on it and will make it clear that the cops shouldn’t be called. If Jason is still speaking with Liz at that point, she’ll completely disregard his orders. General Hospital spoilers say Liz will get 911 on the phone and report a kidnapping. She’s glad Jason is stepping up, but she’s a worried mom who wants all hands on deck to save her son.

Luckily, a couple of other GH heroes are already in play. Curtis Ashford (Donnell Turner) has teamed up with Marcus Taggert (Real Andrews), who just demanded to see his daughter. Trina was shuffled out along with Cam, so Taggert will undoubtedly insist the teens should go free. He’s fully prepared to trade himself, but Cyrus may have given orders to take out Trina and Cam as well.

After all, this is about revenge and causing Taggert pain. What would be more painful than getting his own kid killed? Whatever the case, this will turn into an incredibly dangerous showdown. Cameron will make his escape, so it’s possible he’ll be let go or will slip out when the guard’s not watching. Either way, Cam will run as fast as he can until a loud noise stops him in his tracks.

Whether that noise an explosion or gunfire, Cameron may grow fearful. He’ll be separated from Trina, so he’ll worry about her fate. Will Cam play a role in saving Trina somehow? Could he go back and end up having to be saved himself? Regardless, GH fans can expect some bloodshed thanks to this chaotic confrontation. There’ll be multiple victims headed to GH this Monday, so don’t miss Friday’s turmoil.

In the meantime, Michael Corinthos (Chad Duell) will talk to Sasha Gilmore (Sofia Mattsson) about the changes in his life, which may be changes in her life as well. Michael recently learned he’s Wiley Corinthos’ (Erik and Theo Olson) father, so that’s something that needs to be addressed.

Sometimes kids can be a dealbreaker in a relationship. Michael will want to know how Sasha really feels about this sudden addition. General Hospital spoilers say Sasha will choose to do what’s best for her on Friday. That could mean focusing on her career instead of helping Michael raise a young child. Sasha will feel like she has to put herself first or she might have regrets later.

Will Sasha and Michael split due to Wiley? Will they at least take a break while Sasha sorts through her feelings? No matter how this plays out, it sounds like heartache’s brewing for Michael. It could be his first big sacrifice as a parent to Wiley.

Over with Willow Tait (Katelyn MacMullen), she’ll remain devastated over her own son’s death. The fact that she’s not this Wiley’s mother isn’t helping. It was a double loss for Willow, so she’ll need more support from Harrison Chase (Josh Swickard). Unfortunately, needing and accepting are two very different things. Just because Willow needs Chase doesn’t mean she’ll truly accept his help.

Chase will contend that they’re going to make the very best choice for that little guy – presumably meaning Wiley. He’ll get that Willow can’t shut off her maternal instincts, but there’s a chance she’ll try. General Hospital spoilers, updates and news say Willow will drop a bomb on Michael. Will she think it’s best to remove herself from Wiley’s life completely?

That’s one possibility to mull over. It’s also possible Willow will swing on the opposite end of the spectrum and suggest she can still be a mother to Wiley. Willow may be desperate to cling to Wiley in some way since GH spoilers say she’ll soon wrestle with reality. This mourning mom could be headed for a breakdown if she’s not careful.

Finally, General Hospital spoilers say Molly Lansing-Davis (Haley Pullos) will leave T.J. Ashford (Tajh Bellow) stunned and hurt. She assured T.J. of her love after he popped the question, but she just doesn’t want to marry him. It’s not surprising since Molly’s been trashing marriage like it’s the worst thing in the world. Honestly, Molly! Just chill the heck out.

T.J. will get fed up since he just wants to build a life with the woman he adores. He doesn’t see what’s so wrong about that, but Molly may suggest they can do that anyway. She won’t see why they need a piece of paper to declare them husband and wife.

It looks like Molly and T.J. could be on the outs for a while thanks to this divisive issue. We’ll deliver more GH updates and news as these storylines develop. Don’t miss all CDL’s hot General Hospital spoilers!