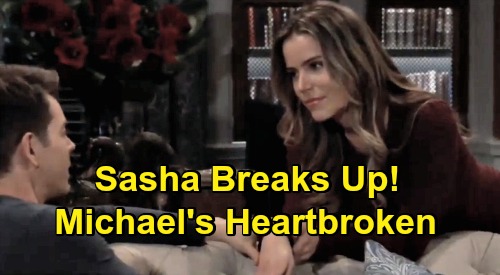 General Hospital (GH) spoilers tease that Michael Corinthos (Chad Duell) and Sasha Gilmore (Sofia Mattson) will have an honest conversation about their future. On February 28, Michael will point out that being Wiley Corinthos’ (Erik and Theo Olson) dad changes everything. He thought this kid was his godson – a child to babysit occasionally and spoil with presents.

Instead, Wiley is Michael’s actual son, which means a full-time commitment to raising him. As Michael’s girlfriend, this would mean a huge commitment for Sasha as well.

Sasha and Michael’s relationship deepened a bit after the shootout chaos, but it’s still relatively new. They haven’t had a chance to talk much about the big stuff like kids and what they’re expecting out of life.

Now Michael’s instantly giving them a family. Sasha obviously isn’t married to Michael, but she will be if she sticks with him. She’ll be a stepmom to Wiley if they remain together and eventually take that next step.

Of course, there’s also crazy Nelle Benson Archer (Chloe Lanier) to consider. Whether Michael likes it or not, he’s always going to be connected to Nelle through Wiley – at least as long as she’s alive!

Michael believes he can keep Nelle away, but it’s doubtful he can. General Hospital spoilers say Nelle’s going to score her freedom soon, so she’ll once again be a thorn in Michael’s side. Until Nelle dies or winds up back behind bars, she’ll forever be a problem for the Corinthos clan.

Being with Michael means accepting that he has a young child to care for and an ex who’s a total psycho. That’s a lot to sign up for! Even if Sasha believes Nelle will remain locked up, agreeing to raise Wiley with Michael is a massive undertaking. Is that something Sasha’s ready for at this stage of her life?

GH fans can’t forget that Sasha is really starting to find her footing in her career. Things are taking off at the Face of Deception – and Sasha even talked to Michael about an Italy expansion.

Could that have been a hint about Sasha potentially bolting for Italy at some point? It’s worth considering since General Hospital spoilers, updates and news say Sasha will put herself first.

In response to this Wiley conversation with Michael, Sasha will admit she has to do what’s right for her. That seemingly means she’ll put her own needs before Michael and Wiley’s. Sasha might suggest a break instead of a split – just to give her time to reflect and figure all this out.