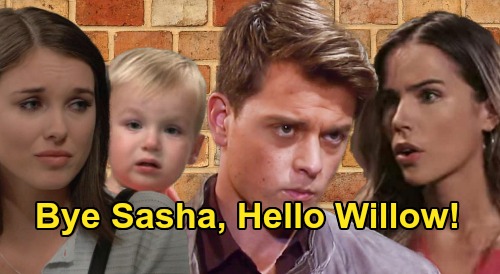 General Hospital (GH) spoilers tease that Michael Corinthos (Chad Duell) will finally be in full-blown Daddy mode soon. GH fans can expect the truth about “Wiley Cooper-Jones” (Erik and Theo Olson) to finally come out. This revelation will explode during the week of February 17-21, so viewers are certainly looking forward to the aftermath.

We’ll see plenty of anger from Michael, but he’ll also be overjoyed about this reunion with Jonah Corinthos. Of course, Michael may end up sticking with the Wiley moniker since the kid’s used to hearing it. Plus, he just looks like a Wiley! Jonah is a perfectly fine name, but it doesn’t seem to fit this sweet boy we’ve all known as “Wiley” for so long.

Whatever the case, Michael will be happy despite his rage. There’ll be a lot of complicated emotions to deal with – and complicated relationships, too. How’s Sasha Gilmore (Sofia Mattsson) going to react to all this?

Sasha will certainly be just as outraged over Nelle Benson Archer’s (Chloe Lanier) deception. Sasha will also be glad that Michael’s been reunited with his child, who he obviously deserves to raise.

At the same time, Sasha should realize this is a drastic change to Michael’s life. As a result, it’ll mean a drastic change to Sasha’s life as well. When Sasha started dating Michael, he was single and childless. Nelle was locked away at Pentonville, so Michael and Sasha could just focus on their love.

However, Michael will soon bring a young son into the mix along with a crazy “baby mama.” He’ll be tied to Nelle forever, so that’s something else for Sasha to mull over.

General Hospital news and updates point to Nelle staying out of prison for at least a bit longer. She’ll still be standing her ground during the week of February 24-28, so she may find a way to keep her freedom.

What happens if Nelle manages to stick around and remains a thorn in Michael’s side? Sasha’s world is going to be nonstop drama. There’s also the future to think about. If Michael and Sasha’s relationship progresses, they’ll eventually get engaged and get married.

Although Sasha and Michael affirmed their love after the shootouts, that doesn’t mean it’s on solid ground. A child is a game-changer – and a deal-breaker for some women. Sasha doesn’t really seem like that kind of gal, but you never really know until something like this actually happens.

General Hospital spoilers reveal that Sasha will put herself first on February 28. She’ll make a decision about what’s best for her, which could indicate it’s not what others necessarily want. Could Sasha dump Michael after all these rapid changes?

Even if Sasha doesn’t firmly break things off, she could still want a break of some sort. Sasha may want to take a step back and reevaluate what she wants out of life. She’ll have to decide if she’s willing to accept Michael and “Wiley” as a package deal.

The writing’s on the wall for Michael and Willow Tait (Katelyn MacMullen) to eventually be paired up, so GH writers will need to start inching them together. If they take this route with Sasha, it’d be a step closer to a “Millow” pairing. Willow will be heartbroken when she learns her son died – she’ll certainly want to stay close Jonah, as he’s the boy she knows as her son.

Whatever the case, General Hospital spoilers say loads of “Wiley” chaos is on the way, so stay tuned. Don’t forget to check out all the hottest GH updates and news as this story progresses.