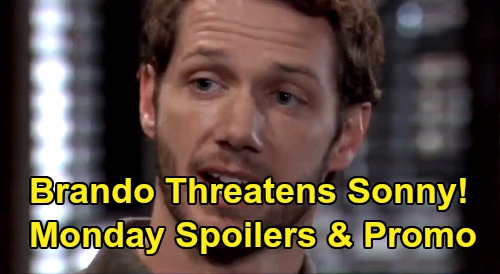 General Hospital (GH) spoilers for Monday, February 17, tease that Valentin Cassadine (James Patrick Stuart) will cross paths with Lulu Spencer (Emme Rylan). He’ll be a bit more willing to negotiate now that he’s been broken by this non-Cassadine news. During Valentin’s chat with a ghostly Helena Cassadine (Constance Towers), Valentin had a shocking realization about his daughter with Lulu.

Valentin seems to have been humbled a bit by his tragic twist of fate, so he’ll urge Lulu to talk things out with him. He’ll point out that they can fight or they can compromise – and it’s clear that compromising would be better for Charlotte.

Meanwhile, Nina Reeves (Cynthia Watros) and Jasper “Jax” Jacks (Ingo Rademacher) will bask in the afterglow of their steamy night together. They’ll enjoy some coffee and conversation as they reflect on having no regrets. Nina took a leap of faith – and Jax is awfully glad she did!

Other General Hospital spoilers say Lucas Jones (Ryan Carnes) will want to have a heart-to-heart with Willow Tait (Katelyn MacMullen). He’ll think it’s time they had a talk about “Wiley Cooper-Jones’” (Erik and Theo Olson) future.

Willow may admit she already heard they might leave town, and Lucas will confirm that they’re indeed leaving.

However, Lucas will undoubtedly make it clear that there’ll always be a place for Willow in “Wiley’s” life. They’ll probably plan on working out some visits and making sure “Wiley” always knows who his mother is.

Even so, it’ll be tough for Willow to think about saying her goodbyes. She’ll try to prepare for that difficult farewell, but it’ll be downright impossible.

Over with Brad Cooper (Parry Shen), he’ll have some updates for Julian Jerome (William deVry). Brad will insist that he’s finally doing what Julian asked and leaving Port Charles behind. Of course, he intends to taking Lucas and “Wiley” with him, which wasn’t originally part of Julian’s demands.

Nevertheless, Julian will admit it’s a good idea. He’ll think this reduces the chances of memory flashes for Lucas, but he’ll end up being wrong about that! More pre-crash memories will surface for Lucas by the time Tuesday’s episode rolls around.

Until then, let’s discuss Nelle Benson Archer (Chloe Lanier) and her own grand plan. Monday’s preview video shows Nelle stating that she’s going to leave Michael Corinthos (Chad Duell) and his family in the dirt. Nelle will have her deal with Valentin all squared away by then, so she’ll plan to hit the road with “Wiley.”

Naturally, Nelle’s plan isn’t going to pan out, which will force her to improvise. It looks like we’re building to a very public “’Wiley’ is my son” declaration later in the week, so we’ll see if that how Nelle drops this bomb. For now, Michael will grow increasingly suspicious about Nelle’s obsession with “Wiley.”

Now Brando will expect Sonny Corinthos (Maurice Benard) to tell him everything he needs to know. He’ll insist on hearing all the details unless Sonny and Carly want him to blow this sky high!

A great GH episode’s in store, so don’t miss it and be sure to check back often for updates. CDL will have all the latest General Hospital spoilers and news as the drama heats up.