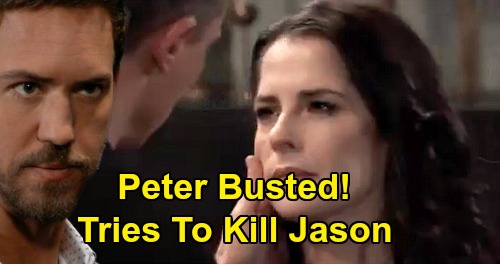 General Hospital (GH) spoilers tease that Peter August (Wes Ramsey) has just received a big warning. As GH viewers know, Robert Scorpio (Tristan Rogers) was spitting mad after Peter sabotaged his deal with Jason Morgan (Steve Burton) and Sam McCall (Kelly Monaco). Peter pulled some strings with the Attorney General, who promptly took Robert off of the case and handed the case over to the bureau, who probably won’t pursue the matter further.

Of course, this was just another move by Peter to cover his tracks – something that Peter has been doing a lot of in recent months. It seems that Peter will stop at nothing to perpetuate his good-guy image with Anna Devane (Finola Hughes) and Maxie Jones (Kirsten Storms). After all, he committed murder to cover up the fact that he hired the assassin to kill Andre Maddox (Anthony Washington) and Franco Baldwin (Roger Howarth).

But Robert made an excellent point to Peter recently. He noted that even though he was off the case and wouldn’t be able to put Peter away himself, Peter still has a big problem on his hands in the form of Jason. As Robert put it, Jason isn’t one to hesitate to take the law into his own hands, and now that Peter has messed with Sam’s freedom and well-being, Jason’s going to be out for revenge.

Well, Robert’s words seemed to resonate with Peter, and that’s got us wondering whether Peter will now try to take proactive measures and try to eliminate Jason before Jason eliminates him. Does Jason now have a target on his back? We suspect that Peter will be keeping a close eye on Jason going forward, as he’ll probably be worried that Jason will come after him.

And if that’s the case, then it seems like this might provide Jason, Sam, and Robert a chance to catch Peter in the act. After all, if Peter were to be led to believe that Jason were going to eliminate him, then he’ll probably order a hit on Jason, and that might be just the way that everyone can finally nail Peter once and for all.

Of course, a plan like this would have some big risks. Jason would essentially be setting himself up to be a target, which is extremely dangerous. But with Damian Spinelli (Bradford Anderson) on his side working behind the scenes, perhaps Jason could stay one step ahead of Peter and know when the hit is coming. And if Robert were willing to work with Jason, they could catch Peter in the act.

We’ll see if that ever happens. As it stands, Robert can’t stand Jason and is always reluctant to work with him. But if it means bringing Peter down once and for all, then he might be persuaded to go for it. The other benefit of actually catching Peter in the act of a crime would be that it would pretty much have to persuade Anna that Peter hasn’t changed – something that Robert would love to do.

At any rate, it seems like Jason, Sam, and Robert don’t really have much choice but to lure Peter into some sort of trap like this. Do you think that they’ll ultimately catch Peter as he tries to kill Jason? Keep watching GH and check back with us here at CDL for the latest General Hospital spoilers and updates.