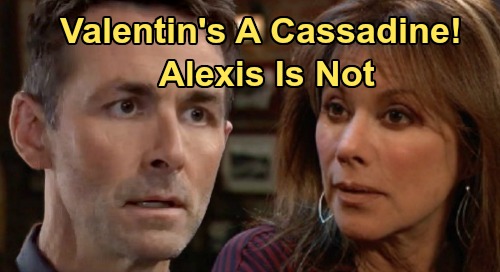 General Hospital (GH) spoilers tease that Valentin Cassadine (James Patrick Stuart) will try to find a way forward. It won’t be easy now that he knows he’s not a Cassadine, but what choice does he have? Valentin feels confident this test was legit since it was carefully monitored, so he’s accepted this as fact.

Of course, things aren’t always as they seem in Port Charles! Let’s say Valentin is right and that test was 100-percent accurate. All it really tells us is that Valentin’s blood doesn’t line up with Alexis Davis’ (Nancy Lee Grahn) blood.

Alexis pointed out that if the test said Valentin wasn’t a match, it meant he wasn’t a Cassadine. What if it’s really the other way around? Is Alexis actually the non-Cassadine here? Since General Hospital rewrites history all the time, there’s no reason that couldn’t be true.

For now, it makes total sense for GH to let things play out this way. Valentin needs to suffer for some of the horrible things he’s done – and it gives Stuart a chance to show off his fantastic acting skills. It’s a nice arc for Valentin, who can ultimately sink to the lowest of lows.

However, Valentin’s the kind of character that you can’t keep down for long. He’ll inevitably come roaring back, but can he do that without true Cassadine status? Perhaps, but maybe he won’t even have to.

If it turns out that Alexis is the one who isn’t a Cassadine, Valentin could reclaim everything he’s lost and bounce back stronger than ever. Some shocking updates could change his life once again.

Being a Cassadine is a huge part of Valentin’s identity, so he’s already struggling over this news. It wouldn’t be a huge deal for Alexis to have her own Cassadine status revoked.

It’s not relevant to who she currently is or to her storyline at the moment. That could be why this potential shocker is being saved for the end of the road – a way to wrap this hot plot up all neat and tidy.

General Hospital spoilers say Valentin’s life will spiral out of control in some horrifying ways, so stay tuned to see how he copes. Since Valentin works well as a Cassadine villain, let’s hope GH writers will undo all this sooner or later.

Do you think Valentin made a wrong assumption about this blood test? Could Alexis be the one who isn’t a true Cassadine? We’ll deliver more updates and news as the drama in Port Charles gets even hotter. Stick with CDL for all the best General Hospital spoilers.