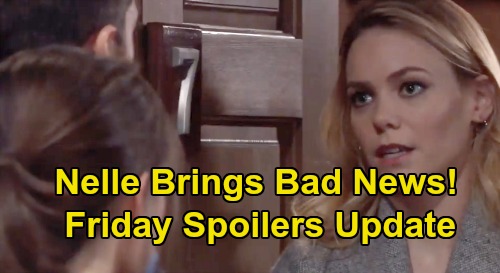 General Hospital (GH) spoilers update for Friday, February 14, teases that Valentin Cassadine (James Patrick Stuart) will talk to Helena Cassadine’s (Constance Towers) “ghost.” He’ll remain deeply distraught as he asks how Helena pulled off this horrible lie. Valentin had been convinced this was all some twisted joke, but the blood test convinced him that he’s genuinely not a Cassadine.

This will serve as Valentin’s opportunity to get some answers, but remember this is apparently just his vision of Helena. Valentin’s mind will tell him what he expects to hear, so this whole story could still be undone down the road.

Meanwhile, Nina Reeves (Cynthia Watros) will wonder if romance is still on the table. She’ll ask Jasper “Jax” Jacks (Ingo Rademacher) about that and hope they have a shot. Luckily, Jax really would like to be more than friends. He’ll wind up in bed with Nina in the near future, so they won’t waste any time!

Over with Nelle Benson Archer (Chloe Lanier), she’ll think Willow Tait (Katelyn MacMullen) needs to do something. At Willow and Harrison Chase’s (Josh Swickard) apartment, Nelle will show up at the door and fill them in on some urgent news.

GH fans know Brad Cooper (Parry Shen) told Nelle about his stunning admission to Lucas Jones (Ryan Carnes). He also pointed out that he might leave Port Charles along with Lucas and “Wiley Cooper-Jones” (Erik and Theo Olson).

Nelle will explain that Brad and Lucas are thinking about leaving town with the kid, so she’ll undoubtedly hope Willow can change their mind.

During Nelle’s tense visit, she’ll seem a bit jealous of Chase and Willow’s relationship. It’s not like Nelle is still interested in Chase, but it’ll bother her that he’s interested in someone else.

Nelle always wants to be the center of attention, so it’ll drive her nuts that she’s barely on Chase’s radar. Chase can’t stand Nelle, but that’s the extent of any passion he feels for her.

Other General Hospital spoilers say Lucas will go along with Brad’s plan. When Brad stops by Turning Woods with his moving proposal, Lucas will decide they should do it. Naturally, this decision isn’t going to pan out since the truth about “Wiley” will be revealed next week!

Until then, Sam McCall (Kelly Monaco) will have places to go and people to see. It looks like Sam will have a talk of her own with Lucas, so it’ll be nice to see them catch up. General Hospital spoilers say Alexis Davis (Nancy Lee Grahn) will also provide support on Friday, so that may tie in with Sam.

Of course, that may be reluctant support! Alexis has been worried about the possibility of Sam getting caught with Jason Morgan (Steve Burton) and being sent back to prison. She can’t support all the sneaking around, but she might support Sam’s alternative.

Since Sam isn’t willing to wait on being with Jason, she intends to butter up her heartless parole officer, Delores Maloney (Andi Chapman).

If Sam can win Delores over, maybe this nightmare of a woman will finally relent. If not, Sam’s fully prepared to take her down instead. Alexis should be concerned about that second option, but she might get behind Sam as long as she stays within the law and is careful.

Other General Hospital spoilers say Michael Corinthos (Chad Duell) will get career updates from Sasha Gilmore (Sofia Mattsson). She’ll probably go over the terms she approved as she gets ready for her revealing interview with Crimson.

Nina wants Sasha to put it all out there – the good, the bad and the ugly. It’s the only way she would agree to do business with Sasha, so Sasha surprised her by saying yes.

Michael will question if Lucy Coe’s (Lynn Herring) all right with this, but Lucy lives for this type of publicity. What better strategy to promote the Face of Deception than for Sasha to expose all her dirt? However, there’s no guarantee this plan will stay in place.

Whether she wants to admit it or not, Nina still has a soft spot for Sasha and may end up wanting to protect her reputation.

General Hospital spoilers say both Michael and Sasha have some shockers headed their way, so stay tuned. CDL’s the place to be for all your GH updates and news, so check back often for more exciting posts.