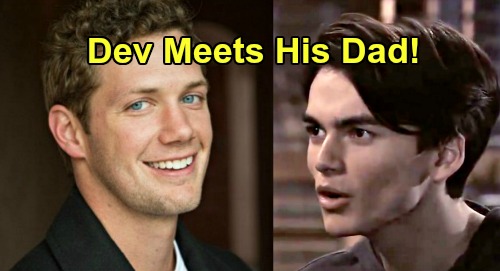 General Hospital (GH) spoilers tease that Brando Corbin (Johnny Wactor) will resurface just in time to save Carly Corinthos’ (Laura Wright) life. That’s great news for Carly, but where has Brando been and what has he been up to? If Brando’s death was faked and he’s part of some undercover mission against the Corinthos mob, that could present some new challenges for Sonny.

However, there’s another intriguing element here. Dev Cerci aka “Devin Corbin” (Ashton Arbab) has already been trying to fake a relationship with his “grandmother.”

Gladys Corbin (Bonnie Burroughs) honestly seems to like the kid and has been doing a good job on her end. Dev has done fairly well all things considered, but his bond with his “nana” doesn’t exactly seem legit.

Now GH is going to throw Dev for a loop by bring his pretend father in the picture. The fact that Brando’s alive is going to bring plenty of questions – most likely ones from the cops and that’s not what Sonny needs.

Although Sonny’s people cooked up the proper documents to keep Dev in the country, this is still the kind of scheme that could easily fall apart.

Nevertheless, Sonny cares about Dev and his well-being. He sees real potential in Dev and doesn’t want him send back to Turkey. If Dev gets deported, he could find himself in a life-threatening situation. Dev could be killed, so Brando may take pity on the kid and play along for the sake of saving him.

General Hospital spoilers say Dev will eventually meet his “dad.” That should be awkward, but they really need to get used to each other if they’re going to play this game and fool Port Charles.

Perhaps Brando’s sudden appearance will give Dev a reason to confide in Josslyn Jacks (Eden McCoy). He pushed her away, but this new drama could bring them closer again.

Whatever the case, it’s nice that Dev’s adding to his fake family. Although Dev’s been putting on a brave face, he seems a tad lonely. Dev’s always hesitant to talk about his past and family back home. There could be more concerning reasons for that, but part of it may be that Dev misses them.

Will Brando and Dev form a father-son bond despite not being the real deal? How will Brando’s surprise survival affect Sonny’s Dev plot? General Hospital spoilers say some hot drama’s ahead, so don’t miss what’s in store. We’ll give you updates as other GH details emerge. Stay tuned to the ABC soap and don’t forget to check CDL often for the latest General Hospital spoilers, updates and news.