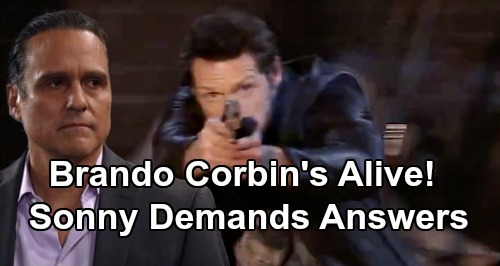 General Hospital (GH) spoilers tease that Sonny Corinthos (Maurice Benard) will face a flood of new problems. For starters, Sonny will have to deal with this whole shootout situation. His family is being attacked from multiple angles, so Sonny certainly won’t stand for that.

However, Sonny will have an added complication to tackle – although he should have some mixed feelings about it. In an upcoming episode, a man intervenes during the shootout Carly Corinthos (Laura Wright) is caught in.

That man is later revealed to be Brando Corbin (Johnny Wactor – cast as recurring), the presumed dead son of Gladys Corbin (Bonnie Burroughs).

The mystery surrounding Brando will continue to unravel. The fact that he saved Carly will inevitably work in his favor! However, Sonny’s going to have plenty of questions.

It’s no coincidence that Brando shows up at the warehouse just in time to save the day. He clearly knew the attack was happening – so Sonny will want to know how and why.

There’s speculation from Jordan Ashford (Briana Nicole Ashford) that Brando may have switched sides. He might’ve been working for Sonny’s enemy before deciding he was on “Team Corinthos.” That could be due to his mom, Gladys, getting caught in the danger.

Brando’s death was obviously faked – or at least wrong assumptions were made and he kept quiet. Whatever the case, Brando may have been undercover all this time. Has Brando been investigating the Corinthos’ clan and their mob ties?

Time will tell, but General Hospital spoilers say Sonny’s bound to be suspicious of this guy. He’ll be grateful that Carly was spared, but he’ll still be on edge over Brando resurfacing.

There’s also the matter of Sonny’s scheme to watch over Dev Cerci aka “Devin Corbin” (Ashton Arbab), who’s supposed to be the son of this “dead” man. Gladys’ involvement may help since to protect her, Brando will have to protect the rest of them.

It’ll be interesting to see just how much Gladys knew. Did she truly believe her son was deceased or has she been lying? Gladys has been way too curious about Sonny’s new enemy and the warehouse. GH fans can tell she’s definitely got some secrets – just like Brando.