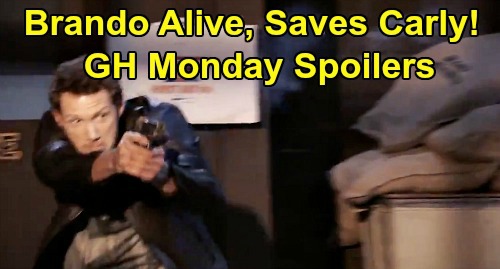 General Hospital (GH) spoilers for Monday, January 27, tease we’ll see the aftermath of the shocking shootouts. Of course, we should mention that impeachment trial coverage has been shaking up the schedule. More preemptions may throw things off again, but just keep in mind that the follow spoilers happen AFTER the episode with the three separate attacks on Sonny Corinthos (Maurice Benard) family.

Now let’s get to all the hot drama. For starters, Jason Morgan (Steve Burton) will take care of business in Brooklyn! When the shooter grabs the waitress, Jason will deliver an ultimatum.

Stone Cold will insist the gunman can live if he lets the woman go. However, the shooter will keep his grasp until the waitress elbows him. That’ll give Jason a chance to fire at the gunman and kill him on the spot.

As for Mike Corbin (Max Gail), he’ll have a major meltdown during all this drama. Mike will cry over and over about how he wants to go home, so he’ll really be in an agitated state.

Jason and Sonny will have to deal with the NYPD cops, who’ll inform them of the other shootings back in Port Charles. They’ll face tricky questions before they’re allowed to leave, but Sonny will be given a warning. He may be contacted again soon.

Unfortunately, Mike’s study won’t pan out. He obviously won’t be in any kind of shape to submit to a trial, so Sonny and Jason will take him home like he wants. They’ll need to get back to their other loved ones in PC anyway.

Bullets will still be flying as Tony tells Carly Corinthos (Laura Wright) not to move. Tony will eventually get shot, but another man will appear and get mixed up in all this.

As Carly tries to help wounded Tony, she’ll find herself at risk of getting shot herself. This mystery man will save Carly’s life and will take a bullet in the process.

After Jordan Ashford (Briana Nicole Henry) arrives on the scene, she’ll get updates and realize this man doesn’t work for Sonny. Jordan will wonder if maybe this guy was working for the gunman and switched sides for some reason.

The man will be unconscious as they wait on an ambulance. When Gladys comes out of hiding, Jordan will pull her gun. General Hospital spoilers say Gladys will protest that she was just an innocent bystander.

That’s when she’ll see the injured man and realize it’s Brando Corbin (Johnny Wactor)– the son she’s been saying was dead. Gladys will seem quite shocked to find Brando bleeding right in front of her.

Down on the docks, Dustin Phillips (Mark Lawson) will arrive just in time to chase the shooter away. He’ll lose track of him, but Josslyn Jacks (Eden McCoy) won’t care. She’ll just be glad Dustin was there to save them. As for Laura Collins (Genie Francis), she’ll be taken to GH following her gunshot wound.

Harrison Chase (Josh Swickard) will grill Josslyn, Michael Corinthos (Chad Duell) and Sasha Gilmore (Sofia Mattsson) about the shooting. He’ll determine that Michael seemed to be the target, but Sasha will get fed up over the interrogation. She’ll think Chase is harassing his friend, but Michael will defend Chase as a detective who’s just doing his job.

At GH, Nikolas Cassadine (Marcus Coloma) will get lectured about his deception. Kevin Collins (Jon Lindstrom) will have some harsh words for Nik, but they’ll soon have to turn their attention to Laura. Dustin will see Nikolas at one point and assume he must be Lulu Spencer’s (Emme Rylan) brother.

After Jasper “Jax” Jacks (Ingo Rademacher) apologizes for kissing Nina Reeves (Cynthia Watros), he’ll suggest it’s not appropriate since he’s her boss. Nina will counter that she never really considered Jax her boss, so he’ll joke that HR will be happy about that.

Soon after, Jax will receive word of the shootout on the docks. He’ll eventually be introduced to Dustin, so Joss will explain that he’s her teacher and just saved her life.

Hamilton Finn (Michael Easton) will let Laura’s family know that the bullet will have to be removed, but he’ll think they have every reason to be hopeful about Laura’s recovery.

Later, Finn will remind Nikolas that Violet Barnes (Jophielle Love) needs her mother back. He’ll insist he knows what Nik did to Hayden Barnes (Rebecca Budig). Finn will think Elizabeth Baldwin (Rebecca Herbst) deserves to know the truth, but Nik won’t be sure this is the right time.

Finally, Ava Jerome (Maura West) will face off with Valentin Cassadine (James Patrick Stuart) now that he’s out on bail. She’ll rant about Valentin trying to kill her, but Valentin obviously won’t be broken up about it!