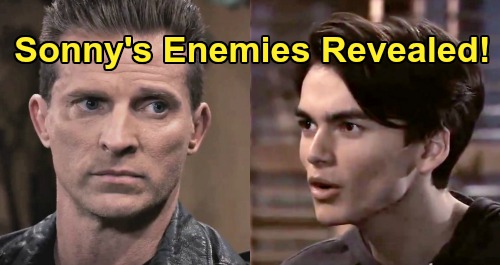 General Hospital (GH) spoilers tease that Sonny Corinthos (Maurice Benard) will decide he’s done playing games. No more Mr. Nice Guy – not that Sonny was ever nice! When it comes to his enemies, Sonny’s willing to do whatever he has to do. It’s all about keeping his loved ones safe.

In the GH episode airing January 22, Sonny’s attacked from multiple angles. Sonny and Jason Morgan (Steve Burton) are targets at a café in New York City, which drags Mike Corbin (Max Gail) into the crisis.

Meanwhile, Michael Corinthos (Chad Duell) is a target down by the docks in Port Charles. That also puts Josslyn Jacks (Eden McCoy), Sasha Gilmore (Sofia Mattson) and Laura Collins (Genie Francis) in harm’s way. Laura suffers a gunshot wound as a result, to this is serious business.

Carly Corinthos (Laura Wright) is also a target at Sonny’s warehouse, where she’s forced to take cover from flying bullets along with Gladys Corbin (Bonnie Burroughs).

It looks like Laura will be the only one who suffers any physical injuries, but Mike will be pretty traumatized by the whole ordeal. This is the last thing poor Mike needed!

Of course, everyone else involved will be pretty shaken up. This three-way attack will leave Sonny more determined than ever to shut this enemy down. To do that, Sonny needs to figure out exactly who it is.

Considering the way GH has played up this mystery angle, it seems like more than just the usual mob drama. It feels like there may be some surprising culprit just waiting to be discovered.

With that in mind, we should consider an intriguing option. Sonny took Dev Cerci (Ashton Arbab) into his home knowing the risks. If Dev was deported and sent back to Turkey, there’s a good chance he’d be killed.

There’s no reason the same people who would kill Dev in Turkey couldn’t come to the U.S. and target Sonny.

It’s also worth mentioning that Dev seems hesitant to open up about his family. Could they basically be the Turkish version of the Corinthos clan? Dev feels like he’s got everything he needs right there in Port Charles. He’s always hesitant to divulge much about his parents and extended family members.

Another factor is that Jason has never trusted Dev and has shared his instincts with Sonny in the past. When Stone Cold senses trouble and danger everyone needs to pay attention!

Nothing can be confirmed about Dev and his past, so his family could certainly be behind this threat to Sonny. They may view Sonny as someone who’s corrupting Dev instead of helping him – or as a target or takeover.

Also worth noting that if Dev’s family or past associates are behind the mob attack it doesn’t mean Dev knows about it.

As for Gladys, it feels like she may be a double agent. Gladys has been acting suspicious lately – like when she turned down a massage in favor of a warehouse tour. Why on earth would Gladys care about that?

Perhaps it’s because Gladys is being paid or threatened to care about it – and to butt her nose in Sonny’s business. Gladys has definitely been far too curious lately, so something must be up.

No matter how all this turns out, General Hospital spoilers say Sonny will have to get some answers fast! He can’t risk any more deadly danger for his loved ones.

It sounds like some exciting scenes are ahead on General Hospital. We’ll give you updates as other GH news comes in. Stay tuned to the ABC soap and don’t forget to check CDL often for the latest General Hospital spoilers, updates and news.