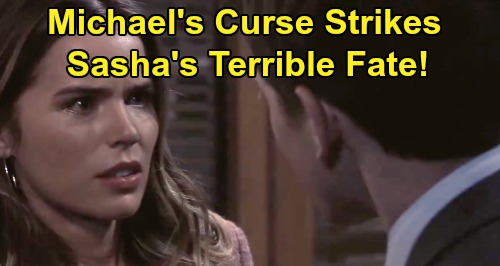 General Hospital (GH) spoilers tease that Michael Corinthos (Chad Duell) will try to put Sasha Gilmore’s (Sofia Mattsson) well-being before his own desires. Sonny Corinthos (Maurice Benard) has a mysterious enemy that seems poised to keep going after his family.

After three shocking shootouts – including one Sasha’s involved in – Michael will decide he can’t have Sasha anywhere near this deadly drama.

GH fans can expect Michael to try breaking up with Sasha, but she’ll put up a fight. Sasha will wonder how she’s supposed to just walk away and get on with her life. Michael will insist he’s trying to protect Sasha, but she just won’t understand why.

That’s when Michael will blurt out that he loves Sasha, which certainly won’t help with his breakup goal!

Sasha can’t give Michael up when she feels the same way. General Hospital spoilers say these two will make relocation plans during the week of January 27-31. They may shift their strategy and hide out for a while. Sonny’s enemies can’t go after Sasha and Michael if they don’t know where they are.

However, we can’t forget about Michael’s enemies. His worst one at the moment is Nelle Benson Archer (Chloe Lanier), who’s obviously dangerous. Nelle has proven she’s capable of murder, so Sasha could become a target.

Although Nelle’s focused more on Willow Tait (Katelyn MacMullen) right now, that doesn’t mean Sasha will escape Nelle’s vicious wrath. After all, Nelle made it clear to Brad Cooper (Parry Shen) that she didn’t want Sasha around “Wiley Cooper-Jones” (Erik and Theo Olson) either.

A little piece of Nelle will always be obsessed with Michael, so she’s not keen on any love interest he might latch onto – especially if that love interest could end up playing a big role in “Wiley’s” life.

Between Sonny’s lingering cloud of doom and Nelle’s crazy schemes, there are certainly paths to a grim fate for Sasha. We also have to consider Michael’s curse! His love life just never works out well for long.

Many of his exes have died, so will history repeat itself with Sasha? It’s an option worth considering since Michael’s so concerned about her.

Charlotte Cassadine (Scarlett Fernandez) also cut up Sasha’s photo, which could’ve been another ominous hint. If General Hospital intends to put Michael with Willow – which seems to be the plan down the road – they’ll have to get Sasha out of the picture. Killing Sasha off would do the trick.

Plus, we can’t help but notice that Sasha doesn’t add much to the canvas. Mattsson is gorgeous gal and a great actress, but her character doesn’t have much depth. Willow is the sweet one, Brook Lynn Quartermaine (Amanda Setton) is the spicy one and Nelle is the psycho one.

Where does Sasha really fit in? Do we need another sweet character when we’ve already got Willow? They have very similar personalities. They’re both remarkably loving and kind unless they’re pushed too far.

Bottom line, Sasha needs to watch her back around Port Charles! She isn’t safe at this point in the story, so Michael will either have fight harder to protect Sasha or prepare for the worst. We’ll give you updates as other GH news comes in. Stay tuned to the ABC soap and don’t forget to check CDL often for the latest General Hospital spoilers, updates and news.