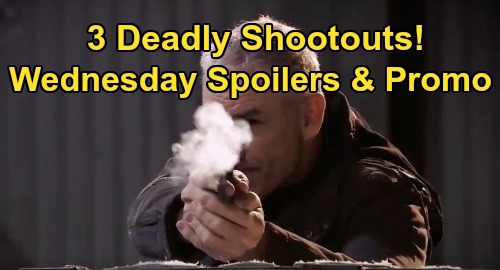 General Hospital (GH) spoilers for Wednesday, January 22, tease that not one, not two, but three shocking shootouts are on the way! We should note that due to impeachment trial coverage, GH announced that they’d push Tuesday’s episode back to Wednesday. Fortunately, the hot drama ahead will be worth the wait.

Back in Port Charles, Michael Corinthos (Chad Duell) will be down on the docks with Laura Collins (Genie Francis), Sasha Gilmore (Sofia Mattson) and Josslyn Jacks (Eden McCoy).

Over at Sonny’s warehouse, Carly Corinthos (Laura Wright) will be on hand with Gladys Corbin (Bonnie Burroughs). In all three locations, men will emerge with guns blazing! It’ll leave everyone in a mad dash to protect themselves from flying bullets.

Moments later, General Hospital will take us back to two hours prior. We’ll see what landed all those Port Charles residents in such risky positions.

Next, Willow Tait (Katelyn MacMullen) will gripe to Sasha about Brad Cooper (Parry Shen). She’ll point out Lucas Jones (Ryan Carnes) was always the responsible one, so she’ll be terrified he won’t wake up.

Willow just won’t be sure how she’s supposed to accept Brad being a father to “Wiley” on his own. At Crimson, Lulu Spencer (Emme Rylan) will deal with parenting problems, too.

She’ll ask Charlotte Cassadine (Scarlett Fernandez) about the cut-up picture of Sasha, but Charlotte will lie that Nina Reeves (Cynthia Watros) did it.

As for Valentin, he’ll get out on bail and the attempted murder charge on Ava Jerome (Maura West) will be dropped. Valentin will remind Lulu that he still has a right to see Charlotte, but Lulu will suggest that won’t be the case for long. She’ll plan to get a restraining order and keep Valentin away from his daughter.

Back with Nelle, she’ll push Willow’s buttons about giving up “Wiley.” Although Willow will be sorry that Michael lost his son, she’ll admit she’s growing increasingly glad that Nelle’s not a mother.

Over with Michael, he’ll fill Josslyn in on Nelle’s imminent move. Joss will think instead of moving Nelle into the Quartermaine mansion and putting his life at risk, he should take a different approach.

General Hospital spoilers say Josslyn will argue that if Lucas doesn’t awaken, Michael should have Willow revoke the adoption and take back custody of “Wiley.” Sasha will show up later and agree to move in with Michael.

Laura will also end up on the docks to discuss pier renovations. Josslyn will start to leave, but she’ll realize she’s forgotten her journal. That’s when total mayhem will break out!

Laura will get shot in the midst of all this, so she should be in a dire state. In New York City again, Mike will get chatty with a suspicious barista. Nearby, Jason and Sonny will have a strategy session. General Hospital spoilers say they’ll hope for a meeting of all the mob families without incident.

Jason will also praise Sonny for opening his heart to Mike and developing a bond. He’ll reflect on his relationship with Alan Quartermaine (Stuart Damon) before his death and wish he hadn’t pushed him away.

Before Jason and Sonny can leave with Mike, the shootout from earlier will replay. General Hospital fans can expect to see Jason in hero mode soon enough!

Over at the warehouse, a different gunman will open fire on Carly while Gladys ducks in a room with a worker. Carly will scramble to save herself as bullets go all over the place.

On their plane ride home, Ava Jerome (Maura West) will support Nikolas Cassadine (Marcus Coloma) in her own special way. Ava will get that Nik’s hurting over Spencer Cassadine’s (Nicolas Bechtel) reaction, but she’ll think Nik needs to suck it up.

Nikolas and Ava will eventually settle on a deal. Ava will make it clear that no lovemaking will be part of this marriage. As for Nikolas, he’ll have one more condition of his own. Nikolas will think that cheating would make him look weak, so Ava will have to be faithful.

Elsewhere, Valentin will speak with Martin Gray (Michael E. Knight) and get confirmation that Nelle has no clue of what’s up. Martin’s actually working for Valentin, not Nelle. Finally, Jax will have a nice lunch with Nina in her office. He’ll eventually ask Nina to slow dance before going in for a kiss!