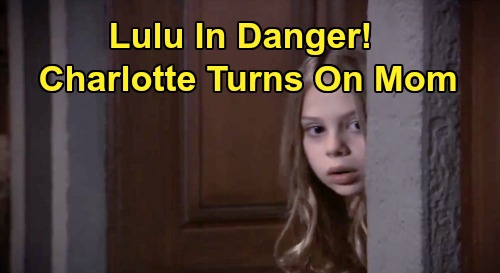 Charlotte recently did something pretty disturbing when she grabbed a pair of scissors and sliced up Sasha Gilmore’s (Sofia Mattsson) photo. GH could be setting up a bad seed angle here. It wouldn’t really be out of left field since Charlotte hasn’t been the best-behaved child.

We can’t forget how Charlotte tormented poor Aiden Webber (Jason David) along with her classmates. Charlotte’s certainly been bratty from time to time – and she recently jumped in the harbor after insisting her “secret bodyguard” would save her.

Laura Collins (Genie Francis) has been deeply worried about Charlotte’s issues – which could get worse thanks to all the custody drama with Valentin.

Lulu will announce that she intends to file a restraining order, and it seems Charlotte will overhear. Will GH take this opportunity to rev up Charlotte’s dark side? They’ve laid the groundwork already, but this is the perfect time.

Why? Because of Valentin’s alleged mother! Nikolas insisted that Valentin is actually Helena Cassadine’s (Constance Towers) son, which would make Charlotte her granddaughter.

Now that could change if GH chooses to alter Charlotte’s paternity, but it’s worth considering for the sake of this mini psycho possibility. Charlotte could turn into a pint-sized version of Helena with some manipulative moves and dangerous choices. Will Charlotte retaliate if Lulu tries to keep her from Valentin? Could she try to harm Lulu in some way?

General Hospital spoilers say Charlotte definitely has some problems that need to be addressed. The kid’s been through a lot, so it’s understandable that she’d have issues.

If those issues are left unchecked, big trouble could be brewing. Charlotte’s showing signs of some sinister tendencies, so Lulu could be at risk if she pushes her daughter too far.

It sounds like the excitement’s about to rev up. We’ll give you updates as other GH news comes in. Stay tuned to the ABC soap and don’t forget to check CDL often for the latest General Hospital spoilers, updates and news.