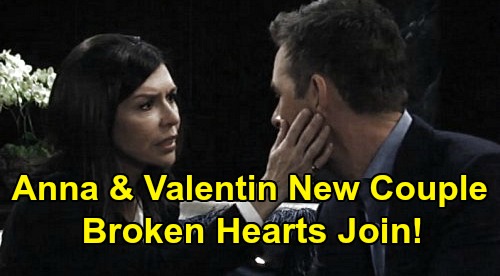 General Hospital (GH) spoilers tease that two characters are suddenly facing harsh realities. Valentin Cassadine (James Patrick Stuart) was rocked by the revelation that he wasn’t a true Cassadine. He doesn’t know who he is anymore and is struggling to make sense of his life.

Valentin’s troubles are only going to get worse as time goes on. He seems to be on a downward spiral that won’t stop until he reaches rock bottom. Meanwhile, we’ve also got Anna Devane (Finola Hughes), who’s facing a harsh reality of her own. Anna has been in denial about Peter August (Wes Ramsey) and it’s easy to see it’s taking a toll on her.

There’s a good chance Nina will reunite with Valentin like she always does down the road, but this is a chance for GH to shake things up. They might as well let Valentin find another shoulder to cry on – and perhaps offer up his own. Like Valentin, Anna is sinking deeper and deeper into despair. She’s spinning out a bit and could easily empathize with Valentin in this case.

General Hospital writers might even give Anna and Valentin another reason to bond. GH fans know Anna suspects Peter is actually Alex Devane Marick’s (Finola Hughes) son instead of her own. That hasn’t been proven, but GH probably wouldn’t have introduced the possibility if it weren’t true.

Even so, Anna loves Peter like he’s hers and wants to believe in him. She’s in for a rough time after all of Peter’s horrible actions are firmly exposed – including his involvement in Drew Cain’s (Billy Miller) death as well as the hits ordered on Andre Maddox (Anthony Montgomery) and Franco Baldwin (Roger Howarth).

The news about Peter being Alex’s son could come out for certain and bring more sorrow. Peter may get updates and turn against Anna depending on how all of this goes down.

As for Valentin, there have been major warning signs that Charlotte Cassadine (Scarlett Fernandez) may not be his biological daughter. Valentin adores Charlotte just the same, so he would definitely be able to relate to Anna.

This romance writes itself! The parallels are undeniable and the chemistry’s evident. Many General Hospital viewers have been rooting for this “Vanna” pairing for a long time. We got the first hint that it might be happening after Anna helped save Charlotte from Cassandra Pierce (Jessica Tuck), which brought a tender moment with Valentin.

General Hospital spoilers say both Valentin and Anna could use a romantic reboot. It absolutely makes sense to put these broken hearts together and let sparks fly. Could you get on board with Anna and Valentin as a couple? There should be other news and updates as this potential story heats up, so stay tuned and remember CDL’s your hotspot for exciting GH content.