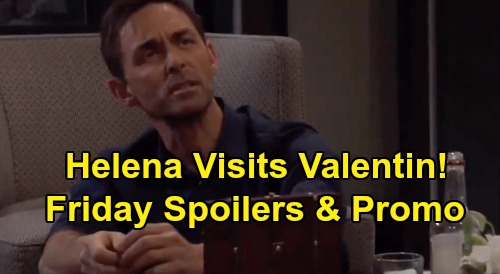 General Hospital (GH) spoilers for Friday, February 14, tease that Michael Corinthos (Chad Duell) will get some surprising updates. He may talk to Sasha Gilmore (Sofia Mattsson) about her Crimson tell-all interview and wonder if Lucy Coe (Lynn Herring) is OK with this. Of course, Lucy seems to love the literal Face of Deception thing, so she probably thinks it’s only going to boost their brand.

Regardless, Sasha agreed to Nina Reeves’ (Cynthia Watros) terms and intends to honor them. It’ll be interesting to see if Nina eventually backs down on the idea. Over with Sam McCall (Kelly Monaco), she’ll meet with someone and ask what he or she wanted to talk to her about.

This may be Alexis Davis (Nancy Lee Grahn) staging a one-on-one intervention about Sam’s reckless behavior.

Alexis has been worried that Sam’s going to violate her parole and get herself send back to Pentonville. She knows what that would do to Sam, Jason Morgan (Steve Burton) and especially the kids. Alexis understands that Sam’s in love and wants to be with Jason, but she can’t keep risking everything like this.

However, Sam’s got a new plan that could solve all her problems – or make them worse if it all goes wrong! She intends to win her parole officer over or take her down if that doesn’t work. Either way, Delores Maloney (Andi Chapman) is about to be manipulated and she’s clearly not the kind of woman who’ll tolerate it if she finds out.

Sam will likely fill Alexis in on this news, which probably won’t do much to alleviate Alexis’ concerns. As for Brad Cooper (Parry Shen), he’ll make his way to Turning Woods and find a still recovering Lucas Jones (Ryan Carnes).

After Brad heard about a possible position in Portland, it gave him the idea to leave Port Charles behind with his family. It looks like Lucas will hear Brad’s pitch on Friday and agree it’s a good one.

Brad will smile and marvel at the fact that they’re really doing this. He’ll just have to hope that no pre-crash memories surface of his confession. Nelle Benson Archer (Chloe Lanier) certainly wasn’t happy about Brad’s intentions, so she’s moving full-speed ahead with her next scheme.

Nelle left Valentin Cassadine (James Patrick Stuart) a voicemail about selling the shares, but she wants to work fast since she intends to take a trip.

Naturally, Nelle will work some other angles as well. She’ll wind up at Harrison Chase (Josh Swickard) and Willow Tait’s (Katelyn MacMullen) apartment in Friday’s GH episode, so they’ll consider this the ultimate unpleasant surprise.

Nelle will point out that Brad and Lucas are thinking about leaving town. She’ll probably advise Willow to talk them out of it or risk saying goodbye to her “son.”

There’ll definitely be some conflict once “Wiley Cooper-Jones” (Erik and Theo Olson) is brought up. Nelle will also find herself battling a bit of jealousy since she used to be with Chase once upon a time. That was another one of Nelle’s manipulative plots, but she’s a tad possessive of Chase just the same.

Next, General Hospital spoilers say Nina will want to get honest with Jasper “Jax” Jacks (Ingo Rademacher). She’ll wonder if something’s still an option or if she’s already blown it, so this is likely about their potential romance.

Jax can’t get Nina off his mind either, which means he’ll indeed be on board with more than friendship. These two will make love in the week ahead, so stay tuned.

Until then, General Hospital fans can expect a ghostly conversation between Valentin and Helena Cassadine (Constance Towers). He’s in a dark place thanks to his lost Cassadine status, but what he could really use are some answers.

Valentin will ask Helena how she pulled off such a horrible lie, so Helena will offer up an explanation. This will all be in Valentin’s head, but it’ll bring some fun scenes anyway.

General Hospital spoilers say the drama’s revving up in Port Charles, so we’ll pass along news as it develops. Don’t miss what GH has in store and check out all our daily updates here and CDL.