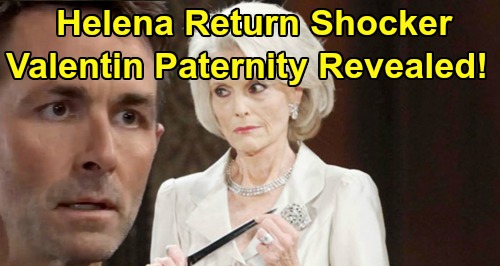 General Hospital (GH) spoilers tease that the battle over the codicil to Mikkos Cassadine’s (John Colicos) will has just begun. As GH viewers know, Nikolas Cassadine (Marcus Coloma) is now able to produce the original version of the codicil to the courts, thanks to the post-nuptial agreement he just signed with Ava Jerome (Maura West).

And as a result, Nikolas is demanding that Valentin Cassadine (James Patrick Stuart) stay away from Wyndemere and take a DNA test. According to GH history, Valentin was the illegitimate son of Mikkos who was disowned by his dad – and was hated and feared by Helena Cassadine (Constance Towers).

Of course, Valentin doesn’t believe any of this, and he’s sure that the DNA test will prove that he’s a true Cassadine.

But General Hospital spoilers say something will happen soon that could help clear up the vicious battle that’s brewing between Nikolas and Valentin. According to multiple reports Helena will be back on the Port Charles scene in mid-February, and something tells us she’ll have some definite opinions about who’s the rightful Cassadine heir. Of course Helena’s appearances might be as flashbacks.

Helena wouldn’t be brought back on the scene without good reason, and it stands to reason that the feud between Nikolas and Valentin could absolutely explode.

After all, if Helena returns alive, not as a flashback, a mother/son DNA test could easily be done, providing that both Valentin and Helena submit to it. And since Valentin’s ability to possibly retain the Cassadine fortune depends on him taking a DNA test, he probably won’t have much choice.

And the results could blow up Valentin’s world in more ways than one. After all, if the test comes back showing that he’s Helena’s son, then he’s going to be devastated.

Valentin and Helena couldn’t stand each other, so finding out that she’s his mother would be horrifying to him. Plus, if he isn’t Mikkos’ son, and therefore not a Cassadine, it would ruin his ability to fight Nikolas for the Cassadine fortune.

But since this is Valentin that we’re talking about, he might find some way to rig the DNA test – he’s certainly altered his share of DNA tests in the past! If Nikolas is smart, he’ll make sure the DNA testing procedure is pristine and double checked!

At any rate, Helena’s return is probably going to spell big trouble for Valentin or prove him right – but for viewers it could mean finally getting to the bottom of the current mysteries surrounding him. Do you think that Valentin will end up being Helena’s son? Stay tuned to the ABC soap and don’t forget to check CDL often for the latest General Hospital spoilers, updates, and news.