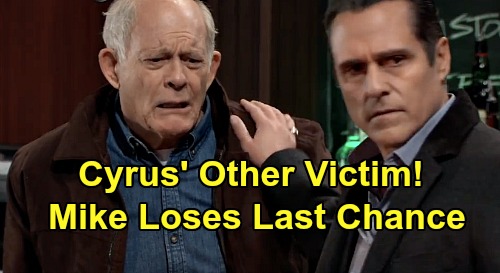 General Hospital (GH) spoilers tease that the turf war will really be heating up in the coming days. As GH viewers know, Sonny Corinthos (Maurice Benard) was nearly gunned down as he and Jason Morgan (Steve Burton) were taking Mike Corbin (Max Gail) through Brooklyn on their way to enroll him in a clinical trial to hopefully extend his life.

At the same time, two other coordinated attacks took place in Port Charles, and Laura Collins (Genie Francis) ended up getting seriously wounded.

Well, according to GH spoilers, all of this will be the work of someone who’s trying to move in on Sonny’s territory…a mobster named Cyrus Renault (Jeff Kober), who will be appearing on the show in the days to come.

Cyrus clearly has a large reach and a serious coordinated effort going on, and it certainly looks like he wants to move in on Sonny’s territory in Port Charles.

Of course, Sonny has yet to return to Port Charles from his trip to Brooklyn, but that will be happening early during the week of February 3-7. He’ll want to get the scoop from his guys about what went down in Port Charles, and he and Jason will need to start figuring out who was behind the attacks on the Corinthos family.

As GH viewers will remember, Sonny’s guys held one of the gunmen for Sonny to interrogate, so answers should be coming soon.

Sonny is going to have some major payback to lay on Cyrus once he identifies him as the source of all the attacks, and Sonny’s not going to be playing around.

Sonny nearly died, and Carly Corinthos (Laura Wright) and Michael Corinthos (Chad Duell) were on the verge of being taken out in an instant. Of course, that will all be completely unacceptable to Sonny, but there will be another aspect of the attacks that will also infuriate Sonny.

Specifically, Sonny is going to realize that Cyrus might well have cost him precious time with Mike. As GH viewers know, Mike has been in a steady state of cognitive decline over the past few weeks, and Sonny’s hope was that the clinical trial would be the last gift he could give his dad.

Now Sonny’s been robbed of that opportunity, and so has Mike. So, really, Mike is a victim of Cyrus’ evil plot.

Something tells us that Sonny is going to go after Cyrus with everything he’s got. It could get ugly, as Sonny will surely feel that he has to strike back to send a message not only to Cyrus but to others who might be watching and wondering about Sonny’s foothold in Port Charles.

As a matter of principle, Sonny will have to make some calculated moves, all with the police watching.

Jordan Ashford (Briana Nicole Henry) is well-aware of what’s going on, and she, Harrison Chase (Josh Swickard), and Marcus Taggert (Real Andrews) will be watching Sonny closely as they scramble to find out who was behind the attacks as well.

Sonny will have to be careful, but he’ll surely avenge what’s happened, and especially because of the hope that he’s now lost as a result of Mike not being able to participate in the clinical trial.

At any rate, once the dust settles a bit and Sonny has a moment to think about what’s gone down, the devastation of having to abandon the clinical trial will surely set in for Sonny. And that will likely be followed by intense anger toward the person responsible.

Cyrus had better watch out, because Sonny’s going to be on the warpath. Stay tuned to the ABC soap and don’t forget to check CDL often for the latest General Hospital spoilers, updates, and news.

“That greedy little opportunist has gone too far!” pic.twitter.com/Tch9dQSpTU