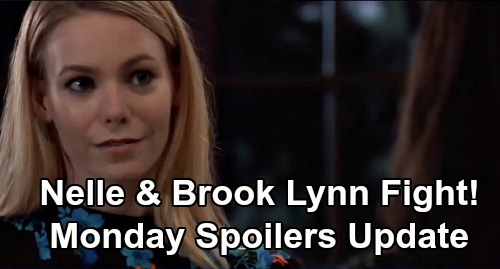 However, Nelle will make it crystal clear that she’s not leaving. She’ll insist Michael Corinthos (Chad Duell) invited her to live there, so Brook Lynn will just have to deal with it.

Of course, Brook Lynn is bound to think Michael’s lost his mind. She won’t want Nelle anywhere near the Quartermaine clan, but at least she won’t be lurking in a guestroom upstairs.

Instead, Michael will put Nelle all the way out in the boathouse. She’ll be disgusted when she realizes she’s losing her cushy spot in the Q manse, but she’ll try to regain her focus and drive the Quartermaine family up the wall.

Since Nelle’s sitting on the massive baby swap secret, Brad will undoubtedly assure Willow he can take care of it. He won’t want Willow poking the bear any more than she already has!

Next, Gladys Corbin (Bonnie Burroughs) will try to figure out what Brando Corbin’s (Johnny Wactor) doing in Port Charles. She obviously knew Brando was alive, but she won’t have a clue why he decided to show up.

Carly Corinthos’ (Laura Wright) found a photo of Brando’s, which featured Gladys standing next to Dev Cerci aka “Dev Corbin.” It turns out Brando printed it off social media and isn’t really in the loop on anything. Nevertheless, Brando has some secrets about his PC mission and will have to offer up some answers.

Speaking of answers, Carly will be falling apart as she seeks some from Sonny. She’ll just want to know who’s targeting their family like this and why.

Sonny will reassure Carly and eventually get updates on his new enemy. Cyrus Renault (Jeff Kober) is a Pentonville inmate who set out to invade Sonny’s territory. He wants to crush the competition and take everything over for himself, so he’s behind the three shootouts and all this Corinthos chaos.

Joss won’t want Dev thinking he’s going to be deported or worse! Even so, Joss won’t quite be ready to reconcile with Dev, so she may draw the line at a bit of support.

Other General Hospital spoilers say Nikolas Cassadine (Marcus Coloma) will pour his heart out on Monday. It’ll be nice to see some remorse from Nik, who’ll feel the weight of what he’s done as he sits by Laura Collins (Genie Francis).

General Hospital spoilers say Laura will put Nik’s mind at ease and promise she’s always going to love him. Nikolas’ mistakes could never change that. It looks like a fantastic episode’s in store for fans. We’ll keep you posted as other GH details emerge. Stay tuned to the ABC soap and don’t forget to check CDL often for the latest General Hospital spoilers, updates and news.

“That greedy little opportunist has gone too far!” pic.twitter.com/Tch9dQSpTU