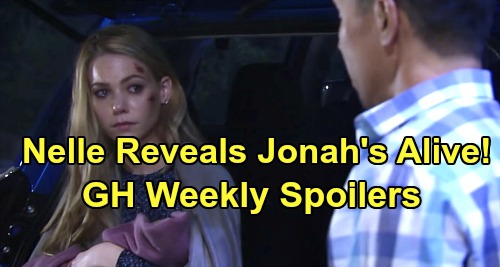 General Hospital (GH) spoilers for the week of February 17-21 tease that the excitement’s about to rev up in Port Charles. First, we should address a blooming love story. More sparks will fly for Jasper “Jax” Jacks (Ingo Rademacher) and Nina Reeves (Cynthia Watros), which will lead to a hot hookup. They’ll head to bed together, so we’ll see if this is a passing fling or a lasting romance.

Next, let’s talk about “Wiley Cooper-Jones” (Erik and Theo Olson) and his true identity. Nelle Benson Archer (Chloe Lanier) switched her baby with Brad Cooper’s (Parry Shen) that fateful night, so it’s time for that secret to come out. Lucas Jones (Ryan Carnes) will continue to face flashbacks, which will build to some stunning moments.

After Nelle scores big bucks for her ELQ shares, she’ll want to leave town with “Wiley.” How in the world Nelle expects that to fly is a head-scratcher, but she’s obviously crazy. There’s no point in trying to make sense of Nelle’s twisted mind.

However, Nelle will find out Brad wants to leave town instead. He’ll have big plans for a future with “Wiley” and Lucas elsewhere, but Nelle won’t stand for it. Surprisingly, Nelle will decide to end this once and for all. She’ll be sick and tired of Brad acting like he’s in charge here, so she’ll blab the baby swap shocker.

Nelle will later exit discreetly, but how far will she make it? Michael Corinthos (Chad Duell) will ultimately find success, so that may involve stopping Nelle from making her getaway.

Whatever the case, Carly Corinthos (Laura Wright) will battle concerns about what’s best for the baby. She may wonder if it’s really a good idea for Michael to just rip “Wiley” out of his current home.

A transition period would be best, but that’s kind of tricky since Brad’s just as guilty as Nelle here. Michael will surely be fired up and ready to make him pay.

There’s also the matter of Julian Jerome (William deVry) and how much Brad will divulge about his involvement. Sonny Corinthos (Maurice Benard) will offer a stern warning to someone, so he may corner Julian in the week ahead.

Whether Brad rats Julian out or not, Sonny’s bound to suspect Julian knew the truth and covered it up. He may warn Julian that if he proves it, he’ll be coming for him.

Next, General Hospital spoilers say Molly Lansing-Davis (Haley Pullos) will have some strong opinions. It’ll be nice to see Molly back on the scene! Many GH fans would like to see more of the Davis girls.

Over with Curtis Ashford (Donnell Turner), he’ll be fed up with Jordan Ashford’s (Briana Nicole Henry). After Jordan meets with an old foe, Curtis will demand some answers. He’ll express suspicions about the secret Jordan’s keeping with Marcus Taggert (Real Andrews), so Jordan will have to decide what she’s willing to share.

Other General Hospital spoilers say Harrison Chase (Josh Swickard) will have some difficult updates to pass along. He’ll most likely fill Willow Tait (Katelyn MacMullen) in on “Wiley” actually being Jonah Corinthos.

While Willow faces despair over the news, Jason Morgan (Steve Burton) will weigh in with his view. He may give Michael and Sonny his perspective regarding all this baby switch chaos.

General Hospital spoilers say some fantastic episodes are on the way. Don’t miss a minute of the action and as always, you can stop by CDL for updates on all the happenings in Port Charles. There’s sure to be some hot GH news as these storylines continue.