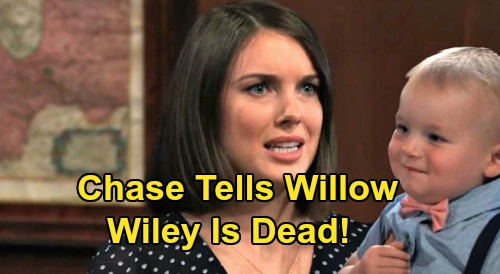 Brad will probably assume Nelle’s not going to say anything. After all, it’d be her funeral, too! However, Brad will apparently underestimate Nelle’s vindictive side. If she can’t leave Port Charles with “Wiley,” then Brad can’t either. Nelle will want Brad to suffer – and he certainly will.

Sadly, there’s someone else who’ll face great pain thanks to Nelle’s revelation. Throughout this baby swap saga, we’ve watched Willow Tait (Katelyn MacMullen) fight so hard to protect a kid that wasn’t even hers. GH fans know Willow loves “Wiley” with all her heart and definitely wishes things had been different.

Willow would’ve loved to have brought “Wiley” into a world where Shiloh Archer (Coby Ryan McLaughlin) didn’t exist – a world where she could’ve kept “Wiley” to raise as her own. Of course, “Wiley” isn’t really Willow’s child, which is what she’s about to find out.

General Hospital spoilers say the “Wiley” shocker will hit hard during the week of February 17-21. Nelle will divulge the baby swap story, so it won’t be long until word spreads.

By Friday, February 21, Harrison Chase (Josh Swickard) will have to deliver some terrible news. It seems likely and fitting for Chase to be the one to break this to Willow. Chase cares about Willow more than anyone else on canvas.

GH could’ve let Willow discover the truth another way, but it sounds like Chase will sit her down and explain in a powerful moment. He’ll have to bring Willow up to speed on all Nelle’s lies, so this should be tough for Willow to wrap her head around at first. Nevertheless, it’ll eventually register for Willow what this means. The real Wiley – HER Wiley – is dead.

Deceased Wiley was swapped with Jonah Corinthos that fateful night, so this baby Willow’s been bonding with was never hers at all. Once Willow gets updates, she’s sure to burst into tears over the bombshell.

General Hospital spoilers state that Chase will support Willow as best as he can, but he may struggle to know what to say or do. How do you even help a person going through something like this?

There’s no manual for how to deal with the aftermath of a baby switch, so General Hospital spoilers say all of Port Charles will just be winging it! As this storyline heats up in all its many layers, check back in here at CDL for more updates and news.