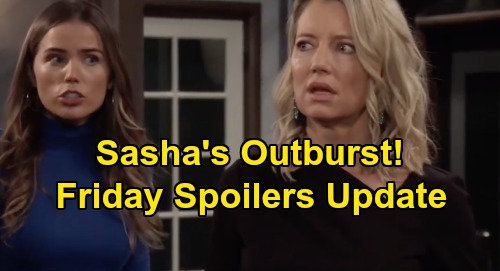 General Hospital (GH) spoilers update for Friday, January 10, teases that Sonny Corinthos (Maurice Benard) will deliver a warning to Julian Jerome (William deVry). He just arrived at Charlie’s Pub, where he suggested he knew what Julian and Brad Cooper (Parry Shen) were talking about on the pier. Julian won’t say much on Friday, especially since he can’t be sure of exactly what Sonny’s in the loop on.

Sonny isn’t aware of the baby swap, but he may rattle Julian if he brings up Nelle Benson (Chloe Lanier) or “Wiley Cooper-Jones” (Erik and Theo Olson). Julian certainly won’t want Sonny getting dangerously close to the truth.

Sonny will want Julian to understand that he won’t tolerate any shady moves. If Julian’s planning anything, Sonny will make it clear that he needs to stand down.

Meanwhile, Jordan Ashford (Briana Nicole Henry) will put Jason Morgan (Steve Burton) through a grilling session. She’ll wonder if Jason and Sonny have made themselves an enemy.

This might connect to the truck hijacking or another round of trouble on Friday. Regardless, Jordan will have some suspicions that she just can’t shake. Jason will stay tight-lipped, but that won’t stop Jordan from sniffing around.

At GH, Brad will tell Michael Corinthos (Chad Duell) and Willow Tait (Katelyn MacMullen) he’s got the perfect person to help out with “Wiley.” Michael thinks it’s time for overwhelmed Brad to hire a nanny, and Julian backed him up on that.

Who will Brad choose? Brook Lynn Ashton (Amanda Setton) might be the ideal option since she’s so good with kids and could tie into the story in several different ways.

General Hospital spoilers say a spark may be ignited between Brook Lynn and Julian down the road, so keeping her close to “Wiley” raises the stakes. Plus, we know that Nelle will find herself pleading her case to Brook Lynn in a couple weeks. That might involve a visit with “Wiley” once Nelle’s a free woman.

Whatever the case, Brad will fill Willow and Michael in on his new nanny this Friday. Over with Elizabeth Baldwin (Rebecca Herbst), she’ll blast Nikolas Cassadine (Marcus Coloma) for letting his friends and family think he was dead. Liz will be frustrated with Nik for refusing to get in touch and let everyone know he was OK.

Of course, Nikolas will tell the same old story about how he made tough choices for Spencer Cassadine’s (Nicolas Bechtel) sake. Liz may not think Nik’s actions were justified, but she’ll be glad he’s alive and well.

However, Liz is bound to find out Nikolas is the reason Hayden Barnes (Rebecca Budig) bailed on Violet Barnes (Jophielle Love). Whenever that revelation finally comes, Liz should really unleash her fury!

Other General Hospital spoilers say Sasha Gilmore (Sofia Mattsson) will think Lucy Coe’s (Lynn Herring) got a dumb idea. Lucy will deliver a proposal at Crimson, where Nina Reeves (Cynthia Watros) and Maxie Jones (Kirsten Storms) will hear her out.

After Lucy insists her plan will help them all move forward, Sasha will think that’s stupid. She may argue that Nina shouldn’t have to put up with Lucy’s pestering.

Sasha feels bad enough for causing so much sorrow, which is why she won’t want to distress Nina any further. She may think Lucy needs to ditch her latest Face of Deception pitch, but Nina could actually be pretty receptive.

Now that things have blown up for Valentin Cassadine (James Patrick Stuart), Nina gets what it feels like to battle regrets over an ill-advised plot. She may cut Sasha some slack because of her own experience.