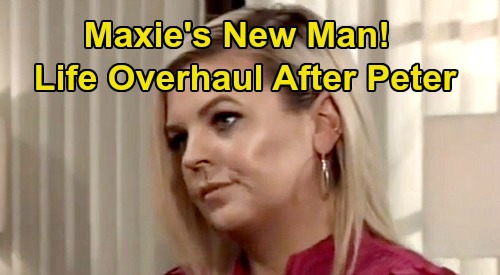 General Hospital (GH) spoilers tease that big changes are brewing for Maxie Jones (Kirsten Storms). For starters, there’s Maxie’s career. GH fans know Maxie’s been feeling a bit unfulfilled for a while now. A few months ago, Peter August (Wes Ramsey) praised Maxie’s talent and suggested she should start her own magazine.

However, Maxie’s still toiling away at Crimson – and she doesn’t seem too happy about it. She stepped up while Nina was dealing with all the wedding drama, but Nina was more than eager to take charge again.

Maxie seemed put out over Nina’s control, but the truth is Crimson is Nina’s baby. As the editor-in-chief, Nina has every right to be in control and handle things the way she wants.

Maxie’s irritation seems a little misplaced here. If she wants to make changes, she should make changes. Maxie could indeed start her own magazine or come up with some other project she’s passionate about.

Of course, Maxie has to be the one to buckle down and make it happen. Otherwise, she’ll just keep contributing to Nina’s success and not her own.

GH seems to be building this unrest within Maxie, which could set up Maxie’s major career overhaul. No matter what Maxie decides do, it definitely feels like she’s about to do something else. This could tie in with another huge change in Maxie’s life: her crumbling relationship with Peter August (Wes Ramsey).

Maxie doesn’t know it’s crumbling at this point, but things are clearly starting to fall apart. Suspicions are rising and proof is being sought. Jason Morgan (Steve Burton) will be instrumental in bringing Peter down in the coming weeks.

Dealing with her grief showed Maxie can do anything she sets her mind to. Maxie’s anger over Peter’s sinister secrets could actually help her as she moves on. She may use that as fuel for this new career path of hers.

Maxie will likely throw herself into work for a while, but maybe she’ll find love where she least expects it. Will Maxie get a new career and a new man in 2020?

Soaps don’t leave people single forever, so Maxie will have to fall for someone else eventually. It’ll be interesting to see if General Hospital pairs Maxie with someone already on canvas or someone who comes later.

A brand-new love interest could always be cast for Maxie. It’s also worth mentioning that Paevey has hinted that he’d be open to sitting down and talking about a return. Maxie and Nathan could be reunited at some point, so that’s something to hope for.