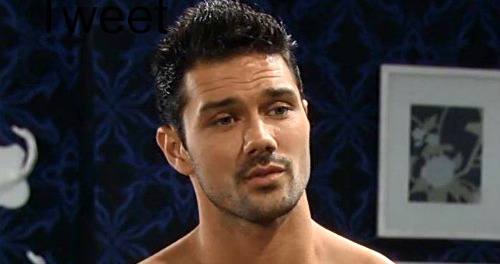 General Hospital (GH) spoilers reveal that the end of the year had some Nathan West (Ryan Paevey) fans feeling reflective. Of course, Nathan was one half of the popular “Naxie” pairing with Maxie Jones (Kristen Storms). After someone shared pics from Paevey’s GH debut, several viewers were eager to tweet about how much he’s missed on the show.

Nathan was killed off in February 2018, but we all know soap deaths don’t always stick! There are plenty of soapy strategies that could bring Nathan back from the dead. When Paevey received tweets urging him to return, he had an intriguing response. It turns out Paevey is indeed open to making a General Hospital comeback.

“My team and i and the GH powers that be would have to have a serious sit down about that….but for now, let’s chalk them up to fond memories,” Paevey said. In other words, nothing is in the works just yet, but Paevey would be on board with sitting down and potentially making a deal. This seems like huge news considering Maxie’s on the verge of devastation again.

General Hospital spoilers say Peter August (Wes Ramsey) will ultimately face his downfall. His sinister secrets will be exposed, but Maxie’s the one who’ll be hurt the most. After Nathan’s crushing demise, Maxie struggled to move forward. It was a long road back to happiness, but she finally feels like she’s found bliss once more with Peter.

Unfortunately, that’s only because Peter’s created this rosy little world. Maxie has no idea that Peter’s been busy delivering deadly orders and causing chaos. Peter’s lying about the extent of his role in the memory-mapping project, but it’s his destructive attempts to hide the truth that have been truly awful.

Sooner or later, Peter’s exposure will likely blow up “Paxie” for good. What’s Maxie going to do then? It would be the perfect opportunity to reveal that Nathan is actually alive and well. Perhaps his death was faked using a doppelganger. As for the “ghost” of Nathan we’ve seen, that could’ve easily just been in Maxie’s head.

General Hospital fans can probably deal with any wild plot twist as long as it reunites Nathan and Maxie. He was a great love interest for her and deserves a chance to be a father to James West (Owen and Curtis Rufca). Since Paevey is open to the possibility of coming back, GH needs to get the ball rolling ASAP!

Would you like to see Ryan Paevey return to Port Charles as Nathan? We’ll give you updates as other GH details emerge. Stay tuned to the ABC soap and don’t forget to check CDL often for the latest General Hospital spoilers, updates and news.

My team and i and the GH powers that be would have to have a serious sit down about that….but for now, let’s chalk them up to fond memories.