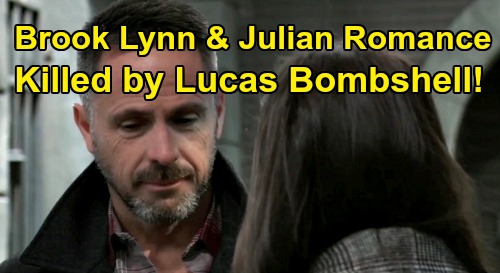 General Hospital (GH) spoilers tease that Brook Lynn Ashton (Amanda Setton) will remain fascinated by Julian Jerome (William deVry). GH fans know that after Brook Lynn returned to town, her first interaction was with Julian. They had some feisty banter at Charlie’s Pub, where Julian was fuming over Brad Cooper (Parry Shen). He gave Brook Lynn a pretty angry and closed-off first impression.

However, Brook Lynn is starting to see how complex Julian is. She mentioned that she thought Julian was dark and brooding before, but he’s a real softie when it comes to his son. They had a nice chat about Leo Falconeri (Aaron Bradshaw) recently. Brook Lynn touched Julian by offering pics of the time of Leo’s life that he’d missed.

GH is setting the stage for sparks to fly between these two. New 2020 preview info points to a surprising attraction for Julian. He’ll be drawn to someone when he’s not even looking for love. General Hospital spoilers say Julian will hit it off with a partner he never expected, so Brook Lynn fits the bill on all of this.

Brook Lynn will undoubtedly be caught off guard by this attraction as well, but it sounds like they’ll take full advantage of it. Of course, this could bring some interesting complications. Julian would probably be the last person Ned Quartermaine (Wally Kurth) ever wanted in bed with his daughter! Nevertheless, that’s probably where Brook Lynn will end up.

Julian and Brook Lynn may view this as a casual fling at first. Neither one of them seems to be looking for anything serious right now. Even so, there’s a chance love could bloom. Brook Lynn and Julian are both facing some secret battles, which could help them feel connected in the coming months.

Unfortunately, the spark that ignites could soon be snuffed out. We can’t forget that Julian tried to murder Brad, which led to Lucas Jones’ (Ryan Carnes) current predicament. Lucas is in a coma because of Julian’s actions. As a good friend of Lucas’ and someone who cares a great deal about him, Brook Lynn isn’t going to be too happy about that!

It’s safe to say Brook Lynn will unleash her fury on Julian along with everybody else – especially after she lets herself grow closer to Julian and opens her heart. General Hospital spoilers say Julian could be poised for sorrow from several angles, so stay tuned for some hot drama. We’ll give you updates as GH news comes in. Stick with the ABC soap and don’t forget to check CDL often for the latest General Hospital spoilers, updates and news.