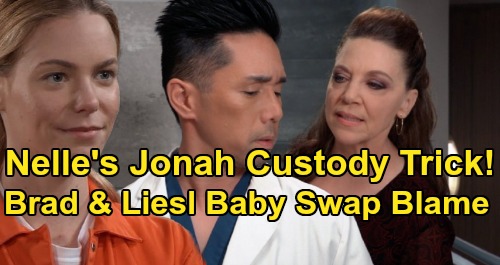 General Hospital (GH) spoilers tease that Nelle Benson (Chloe Lanier) will have to get sneaky and consider her options. Nelle’s currently stuck at Pentonville, but the security at that place leaves a bit to be desired. If Nelle really wanted to escape, she probably would’ve done it by now. Where there’s a will, there’s a way!

Instead, Nelle’s focused on being a model prisoner and is pressuring Martin Gray (Michael E. Knight) to help her get out legally. If Sam McCall (Kelly Monaco) can get out on parole that quick, there’s no reason why Nelle has to remain behind bars – at least in the soap world! Based on Nelle’s vision board, she’s clearly got some big plans for the future.

However, Nelle’s got a major dilemma. She obviously wants to get “Wiley Cooper-Jones” aka Jonah Corinthos (Erik and Theo Olson) back and raise him herself, but there are some huge obstacles. For starters, exposing the baby swap would seemingly put Nelle right back in Pentonville. It wouldn’t do her any favors for the switch to come out unless she can somehow swing the blame away from her.

Is there a way for Nelle to do that? Could Nelle somehow wiggle out of her role in the baby switch? Let’s consider how Nelle might pull that off. For starters, think about who Nelle was presumably married to at the time of his death. There have been plenty of hints that Nelle was Shiloh Archer’s (Coby Ryan McLaughlin) bride. Shiloh’s a threat even in death and still has faithful Dawnies in high places.

It’s easy to imagine Nelle getting a judge in her corner once she’s on the outside and can take full advantage of Shiloh’s connections. Of course, Nelle still needs someone to pin this on. She’s repeatedly talked about holding her baby in her arms and watching the life drain out of him. There’s no getting around that part.

Nevertheless, there was someone else with Nelle the night she gave birth – someone who has a terrible reputation for scheming and has conspired with Brad Cooper (Parry Shen) before. Naturally, we’re talking about Liesl Obrecht (Kathleen Gati). We know Nelle will have a plan when she gets out of Pentonville, and Nelle tends to shift the blame whenever she can.

Could Nelle secretly set the big “Wiley” reveal in motion and claim she was completely in the dark? It’s Nelle’s word against Liesl and Brad’s – and they’re not exactly upstanding Port Charles citizens either.

Nelle could claim that she lost consciousness after giving birth and woke up to the baby placed in her arms by Liesl. She might contend that Liesl knew the kid was dying and conspired to take hers for Brad, who’s a close friend of Britt Westbourne (Kelly Thiebaud).

General Hospital spoilers for 2020 state that Liesl will truly try to change for the better. She’ll want to put the past behind her, but she’ll soon find herself haunted by it instead. That could be a hint that Nelle will try to drag Liesl down to save herself.

It’s possible Nelle could make it happen with this cooked up story and a judge who supported Shiloh on her side. Nelle would still have to share custody of Jonah with Michael Corinthos (Chad Duell), but she has to take things one step at a time here. Perhaps Nelle has a scheme to take care of that, too. Again, that Shiloh support could be crucial.