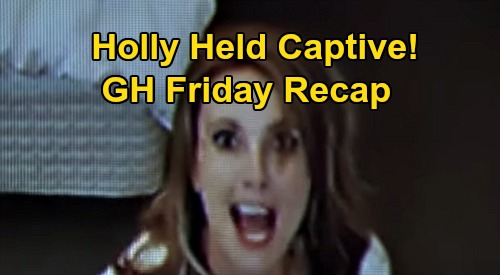 Portia Robinson (Brooke Kerr) helped Alexis in an exam room, and Alexis told the story of her initial injury and re-injury of her wrist. Portia said that she was sorry to have heard about Neil Byrne’s (Joe Flanigan) passing, and that made Alexis emotional. Ned offered Alexis some comfort.

Later, when Alexis was alone, Portia returned to say that Alexis had a fractured wrist, and that an underlying condition was possibly related to Alexis’ bone density. Portia said that based on her symptoms, Alexis could have osteoporosis.

Ned returned and said he’d wait for Alexis while she got fitted for a cast and scheduled tests. Ned then returned to the nurses’ station and wondered why Olivia Quartermaine (Lisa LoCicero) hadn’t called.

Molly was keen for Brando to leave, but TJ wanted Brando to stay and have iced teas with them. When TJ went inside for the teas, Molly and Brando talked about their one-night stand.

TJ returned, wanting to set up Brando with one of Molly’s friends – something that made Molly uncomfortable. TJ then invited Brando to join their group against Cyrus Renault’s (Jeff Kober) hold over the hospital.

Molly reeled, not wanting TJ and Brando to spend more time together, but Brando said he was in. Molly looked upset.

At Turning Woods, Josslyn Jacks (Eden McCoy) returned from a run and told Jason Morgan (Steve Burton) that she had wanted to go feel alive. Jason understood and comforted Josslyn. Jason told Josslyn that Mike lived his life, and that she was someone who should live hers too.

Through their conversation, Michael and Willow Corinthos (Katelyn MacMullen) learned that Brook Lynn would be staying with Chase.

In New York City, Nina Reeves (Cynthia Watros) told Jasper “Jax” Jacks (Ingo Rademacher) that Phyllis Caufield was her nurse when she woke up from her coma, and that here had to be a reason why she was the same person who had the heart pendant separated.

Jax then got a call from Josslyn, who was still at Turning Woods and was upset about Mike’s passing.

Jax said he’d return home in the morning to support Josslyn, and Nina agreed to come home to Port Charles with Jax. “This can wait,” Nina said. “I want you with me for however this ends.”

Back at Turning Woods, Brook Lynn visited with Sonny in Mike’s room. Sonny thanked Brook Lynn for visiting Mike and singing for him, and Brook Lynn told Sonny, “He loved you. You did good, Sonny.”

In the lobby, Willow, Josslyn, and Michael talked, and Willow said that she was touched by how close their family was. Michael and Willow left for home, while Sonny and Carly decided it was time to leave Mike’s room.

Sonny took Avery’s picture and told Mike that he got his bicycle and that he’d always love Mike. Sonny cried, and he and Carly slowly left the room.

As Sonny and Carly were leaving, a staff member rushed out to stop them, saying that she had something for Sonny that the staff had put away for safekeeping.

Another staff member wheeled out a bicycle with a bow and a card attached. Sonny read the card, which said, “Sonny, this is late, but I hope it’s not too late. I love you, Dad.”

Later, Ava rushed out to the living area saying that Avery was gone. Turns out, Avery was out in the woods with a flashlight, looking around.

Avery came upon the half-heart pendant that Nelle Benson Jerome (Chloe Lanier) dropped and picked it up. Just then, Ava and Nikolas found Avery and got her tucked into bed. Nikolas took off, asking Ava if she’d return to Wyndemere tomorrow.

Ava said that she would. In her room, Avery put the half-heart necklace in her backpack for safekeeping then went back to bed.

Winston said that Holly had been held there after they made sure her ship sank, and that she broke free for a moment and appropriated a guard’s phone.

Robert asked what happened to Holly, and Winston said that he’d demonstrate. Winston was about to shoot Robert and Ethan when Olivia burst in with a gun. Robert and Ethan overpowered Winston and his associates, and Robert called the WSB immediately to say that he had a prisoner of interest for them.

Later, a WSB guy joined Robert, Ethan, and Olivia to say they had combed the place and didn’t find Holly. Robert was outraged and roughed up Winston, who would only say that Holly was “gone.”

Winston got carted off by the WBS people, and the WSB guy returned to say they just found a woman’s body in a shallow grave on the property along with a ring.

Robert took the ring and verified that it belonged to Holly – it was her wedding ring. Robert explained that he had given the ring back to Holly two years ago. Robert, Ethan, and Olivia left upset. After they took off, a guy in a tux walked up and placed a call.

The guy told the person on the other end that “they’re gone” and that “Scorpio and Lovett have proof that she’s dead.” The guy also said that “the bureau hasn’t linked this casino to you” and that “Winston knows to keep his mouth shut about what you really did with Holly.”

The person who the guy was talking to was a man who was sitting in the security room of the hotel looking at various security screens. On one of those screens was a woman obviously locked in one of the hotel rooms. It was Holly, who looked up at the screen and said, “You bastard, get me out of here!”

That was a terrific episode of General Hospital, and there’s much more coming next week, so stay tuned! We’ll give you updates as more GH news comes in. Don’t forget to check CDL often for the latest General Hospital spoilers, updates, and news. We’ve got you covered!