General Hospital Spoilers: Is Dustin A Bad Guy, Secretly Working For Cyrus? – Here Are The Clues 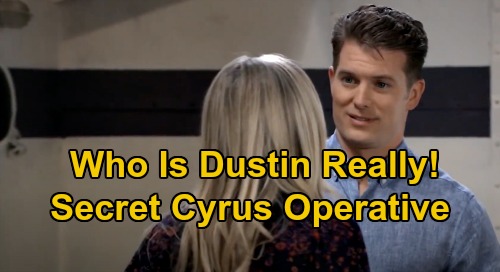 General Hospital (GH) spoilers tease that viewers got a big clue on a recent episode. Dante Falconeri (Dominick Zamprogna) is currently back on canvas but in Geneva, where he’s preparing to do the necessary therapy in order to become well enough to go back home to Port Charles.

Dante’s treating doctor told him that the WSB director was interested in having him work on a mission that involved someone close to him.

Of course, there are several possibilities about who that someone could be. One of the biggest threats to just about everyone in Port Charles right now is Cyrus Renault (Jeff Kober), and he certainly poses a danger to Dante’s dad Sonny Corinthos (Maurice Benard) – possibly even more than Sonny knows, if the WSB is involved.

Cyrus could be more than a simple local drug lord – he could have some serious international ties. If that’s the case, then there could be a very sinister reason why Cyrus had singled out Laura Collins (Genie Francis) and Lulu Spencer (Emme Rylan) in the way that he has.

Sure, Cyrus’ animosity toward Laura is no doubt in part to her being mayor of Port Charles, but lately Cyrus has seemed to have it out for Lulu too, needling her about her family and her past. Even Kevin Collins (Jon Lindstrom) recently quipped that Cyrus seemed to have an odd fixation on their family.

It doesn’t seem like Cyrus’ fixation on the Spencer/Collins clan and Dante being needed for a mission involving someone close to him are just coincidental happenings.

Could it be Lulu who’s in danger here? If it is, that leads to a frightening possibility. Cyrus could be planning something sinister for Lulu…or maybe he already has a sinister scenario in place.

It’s a terrible thought, but could Dustin Phillips (Mark Lawson) somehow be tied up with Cyrus?

It certainly never seemed like Dustin had anything but pure motives when it came to Lulu, but what if Cyrus got his hooks in Dustin and he’s keeping a close eye on Lulu and possibly her family for Cyrus for some nefarious purpose. Could Lulu have fallen for a bad guy, or a nice-guy-turned-bad by Cyrus?

It seems like Cyrus certainly knows an awful lot about Lulu all of the sudden. That information could have come from Dustin, and Dustin could be keeping an eye on not only Lulu but Laura’s movements, too.

We all know that Laura and Lulu are close, and that Lulu has an eye on what her mom’s mayoral office is doing since she’s an investigative reporter.

Of course, from a story-telling perspective, having Dustin suddenly be a bad guy would make some sense, since Dante will be returning to Port Charles at some point.

There’s definitely a contingent of fans who would like to see Dante and Lulu get back together and repair their family with Rocco Falconeri (O’Neill Monahan). And one way to do that would be to have Dustin fall from grace and have Dante end up discovering Dustin’s dark side.

We’ll see what happens here, but there definitely seems to be something going on under the surface when it comes to Cyrus’ fascination with Lulu and Laura. Do you think that Dustin will turn out to be an operative for Cyrus?

Stay tuned to General Hospital and let CDL be your go-to source for all the hot new GH spoilers, daily recaps, and news. Here at CDL, we’ve got you covered!