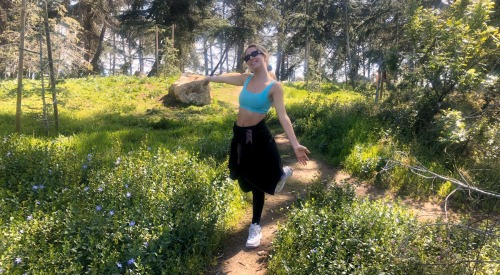 General Hospital (GH) spoilers reveal that one ABC soap star is doing her part to help kids in need. GH has suspended production due to COVID-19 aka the coronavirus concerns, so the cast and crew are all practicing social distancing. It’s important to stay safe right now, but it’s also given the cast and crew some extra downtime.

On Twitter, Eden McCoy (Josslyn Jacks) has been documenting her time away from the show with great photos on hikes. McCoy’s also been talking about current GH episodes and showing off old pics as well as videos from her camera roll. Anything to entertain General Hospital fans who are also stuck at home!

However, McCoy recently took a break from all the fun and addressed a real problem. Since many children rely on school meals to survive, shutdowns due to COVID-19 have certainly brought some worries. McCoy shared crucial information in hopes of encouraging those who can to help those kids in need.

“thank u @emilyskinner for the info that’s helping get meals to kids who usually rely on going to school to eat,” McCoy tweeted. “Now that school is cancelled many kids are going hungry. Read about this organization here, and join me in donating any amount if u can”

McCoy dropped a link for nokidhungry.org, which is part of the push to hopefully end child hunger in America. It’s certainly nice of McCoy to remind everyone of this important issue and round up more support.

Every little bit helps, so McCoy’s using her platform to raise awareness and get more people involved. Soap fans are a powerful bunch and will undoubtedly pitch in if at all possible.

It wasn’t long until McCoy’s followers piped up to praise her for sharing. Some General Hospital fans insisted they were inspired to donate, so McCoy’s message is already paying off! Let’s hope other GH stars will join McCoy in supporting good causes at a time when they really need it.

As for what’s next on GH, General Hospital spoilers say things will remain complicated for the teens. Cameron Webber (William Lipton) has been crushing on Joss for quite some time, but he also kissed Trina Robinson (Sydney Mikayla) recently. What’s a boy to do with two lovely, kind girls in his life? It’ll be interesting to see who Cam ends up with down the road.

We’ll pass along the latest GH news as it becomes available. Will Cameron make some updates to his love life goals? Time will tell, but Trina and Josslyn aren’t going to make this easy for him! Check back here at CDL for other hot General Hospital spoilers, updates and news.

thank u🤍 @emilyskinner for the info that’s helping get meals to kids who usually rely on going to school to eat. Now that school is cancelled many kids are going hungry. Read about this organization here, and join me in donating any amount if u can 🤍https://t.co/vT9JbeRGH4